The actor talks his new film, plus ARROW and FRINGE 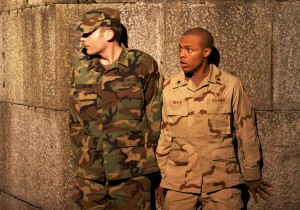 In the film ALLEGIANCE, which opened theatrically last week in New York and this weekend in Los Angeles and Austin and is available on VOD, Seth Gabel stars as National Guard Lieutenant Danny Sefton.

It’s 2003 and National Guard companies, much to their surprise (and often dismay), are being shipped to active combat in Iraq. Sefton has gotten himself reassigned so that he won’t have to ship out with the company, but when one of his men goes AWOL, he finds himself grappling with a huge moral crisis, to say nothing of physical danger.

Florida-born Gabel spent several seasons on Fox’s FRINGE as Fringe Division novice Lincoln Lee, as well as his more experience alternate universe self. The actor has also just shot an episode of the CW’s ARROW as the villainous Vertigo.

Over the phone, he discusses all of these projects.

ASSIGNMENT X: How did you become involved with ALLEGIANCE?

SETH GABEL: I got a call from [ALLEGIANCE writer/director] Mike Connors and [producer] Sean Mullin asking for me, so I read the script and had a meeting with them and was immediately intrigued by how authentic the film they were representing was. Both of them had been in the National Guard and in the military and all of the producers of the film had been, so this film was almost entirely produced and developed by veterans of wars. And so it was very apparent that we were going to be telling a very truthful, honest story that was going to show a war that we’ve seen depicted many ways and many times, over and over again, in a way that was just completely authentic. It was completely unexpected in 2003-4 for the National Guard to be called up to go toIraq. The only precedent for when that had been done before was when the draft was in place. So it was more understandable at that time. But there being a dearth of soldiers to fight wars in 2003, it called up people who had no intention of ever [going into combat].

AX: What were some of the more challenging aspects of making ALLEGIANCE?

GABEL: The most challenging thing was really wanting to depict the characters as authentically as possible. Fortunately, because [there were] veterans who were involved with the shoot, I was able to consult with them, talk with them. We had a one-to-two-week-long rehearsal process, and we were also able to have a boot camp. And the boot camp was great because we were able to bond with the other actors. It was so helpful for me, because my character ends up getting alienated from the group because they’re all supposed to go off toIraq, but I’ve figured out a way to stay back and get out of going. And so they all resent me for that. What was so great was, we were able to establish a relationship in the boot camp together, and then when we started shooting, I became alienated from that process and was no longer a part of that group. So it was interesting during lunch – everyone would be hanging out together, enjoying their time with each other, and from time to time, we’d break character and I’d enjoy myself with them, but there was a real sense of me no longer being part of the bond that was created initially, and that was so helpful for shooting. 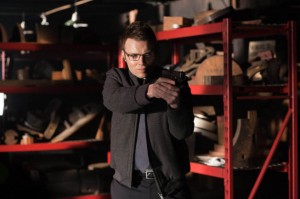 AX: You have some pretty intense physical fight scenes in the film. Did you study combat in acting school? Have you done this kind of thing before?

GABEL: Yeah, at NYU, I took a class called Stage Combat, where you would do a lot of rolls [rolling over]. My wife and I would always joke [about it], because whenever you do stage combat stuff, the big thing you’re working on is rolls, because you need to learn how to fall in a way that’s not going to break your neck. So I had that kind of training. Usually when you do fights, you tend to throw yourself into them completely, but at the same time, keep enough of your rational self in mind that you’re not going to hurt yourself or anyone else. There was a good fight director on that shoot, in that scene in particular. Pablo [Schreiber] and I would get together and practice the moves for the stunts for about a week or two, so we felt pretty comfortable and on the day, we were able to go for it.

AX: Was it very easy to get into Danny’s mindset, or did you have some moments where you were thinking, ‘I really wouldn’t do that, so how do I psych myself into making this emotional switch here’?

GABEL: I felt like Danny and I met in the middle pretty well. I really tried to understand for myself what decisions I might make. If I’m an officer in a military unit, I’m responsible for people who serve under me and are all of a sudden being called to go to Iraq, while at the same time, I’m starting a family, I have all these other prospects going on for me at home. If I had the situation and the ability to stay back and not go, what decision would I make? I really could relate to that struggle and the character is very resourceful, and I took on the abilities that he had that I have as well, and [tried] to really see how I could serve my men, and if I did go over with them, perhaps save some lives. So it’s a real quandary to figure out where my loyalties lie. Is it with the family that I’m creating at home or the family [within the unit]?

AX: There are a lot of different sides to Danny’s character. When we meet him, he’s doing a wheeler-dealer thing …

GABEL: Yeah, the big thing was that Sefton was incredibly resourceful and knew how to be strategic with people. I think he would see himself as someone who didn’t manipulate people, but he allowed himself to be strategic with people. What’s fun about that scene where you see him acquire Gore-Tex for the unit, perhaps in a way that’s not completely honest, was my good friend Jason Lew, who’s a brilliant writer and actor, got to play the part of Sergeant Kraft, and we had so much history together and went to college together. So when we shot that scene, we had a lot of fun. 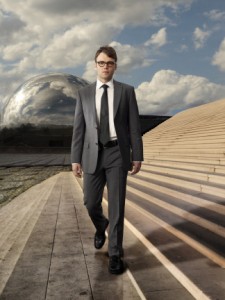 AX: You’re also coming up on ARROW as Vertigo. Have you played a supervillain before?

GABEL: I had never played a supervillain. It was so much fun to do.

AX: Do you get a cool costume?

GABEL: Yeah. I have a very cool costume. They were very collaborative in the creation of the costume and in the character. I had some say in what we developed and created, and ultimately, it was one of the most fun experiences I’ve ever had playing a role on TV.

AX: And are you going to return on FRINGE before it ends?

GABEL: I’m not allowed to say one way or the other.

AX: Do you have any feelings about FRINGE coming to an end?

GABEL: Well, I’m so happy that it’s ending this way. I think people realize that that show was so close to cancellation so many times and really didn’t deserve to be, but just the way that we run the numbers and statistics these days, and the way that we monitor and count how people are watching the show, is not quite up to the reality of how people view shows nowadays, especially a show that is tech-savvy. The audience of FRINGE is very tech-savvy, so they’re going to watch it in ways that aren’t always reflected in the ratings. To have this final season of thirteen episodes I think is a really good sign that networks are paying attention, they care about the quality of shows that are on TV and they’re willing to reward a loyal fan base with what they deserve, which is a satisfactory ending to a great story.

AX: Back to ALLEGIANCE, do you have a favorite scene?

GABEL: I had a lot of fun in the scenes where I was being interrogated by Pablo and Malik [Yoba] and Dominic [Fumusa]. We were able to improvise a lot during those scenes and Mike gave us a lot of time to into the scenes and yell at each other and improvise before “Action” or “Cut” was ever called, so we were able to do a series of takes where we just let ourselves get into heated arguments, say the lines that were written, [improvise] when it felt appropriate, and ultimately we got some really great stuff on film.

AX: Do you feel that that ALLEGIANCE has timely qualities as well as being a depiction of something that a lot of people went through at that time?

GABEL: Definitely. What makes ALLEGIANCE different from other war films is that it is a completely authentic experience told by veterans of war who’ve experienced the dilemmas that you’ll see in the film. That’s one of our most recent wars and the way people are nowadays is absolutely the same. We have a country that faces very [diverse] challenges, and to understand what’s going on in the mind of a person who is fighting on our behalf and really having a real sense of what their experience is and what they’re going through gives us a sense of what the stakes are when we make the choice to go to war.