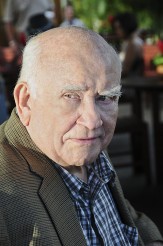 The actor talks Broadway, returning as August March and being a decent human 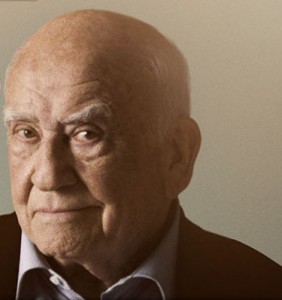 Right now, Edward Asner is in the play GRACE at the Cort Theatre on Broadway. The show opened Oct. 4 and is closing this Sunday, Jan. 6. Asner will doubtless head into another acting gig. The seven-time Emmy winner, famous to TV viewers for playing Lou Grant on THE MARY TYLER MOORE SHOW and LOU GRANT, and beloved by filmgoers of all ages for voicing balloon-maker Carl in UP, took some time to talk about his play, his recent appearances on HAWAII FIVE-0 and what we all can do to make things a little better for each other.

ASSIGNMENT X: Can you talk about GRACE?

EDWARD ASNER: GRACE is by Craig Wright, one of the great writers of SIX FEET UNDER, and Dexter Bullard is directing, Paul Rudd is starring, Michael Shannon is costarring, Kate Arrington is the third member of the cast, and I bring up the rear.

ASNER: I play a German-born exterminator. I service the two apartments of the other three characters.

AX: Are you what ties them together?

ASNER: No, I don’t tie them together – they tie me together.

AX: Does GRACE have any particular themes that attracted you to it, or was it just the writing and the cast?

ASNER: What attracted me to it is that I’m a man who tells an interesting story, a man who has a fascinating life story, and in the telling experiences an epiphany. It’s what drew me to the character – the fascination of the story and the fact that he undergoes an epiphany, whether you accept the conclusion of the epiphany or not.

AX: Were you looking to do Broadway right now?

ASNER: They came to me.

AX: Had you worked with any of these people before?

ASNER: No. I think [the play GRACE] will be an interesting event, hopefully we’ll succeed at it. I was massacred the last time I was on Broadway, so if I get through with my neck this time, I don’t know [laughs]. But this is my way of recapturing some of the stock I may have lost in 1989.

AX: You’ve also been in two episodes of the new HAWAII FIVE-0, one last season, one this season, as August March, who was a character you played in the original HAWAII FIVE-0 series …

AX: Did you rewatch the original episode in preparation for playing him again?

ASNER: I saw the excerpt that they showed. 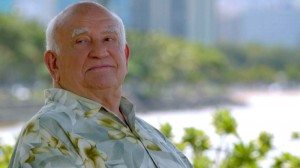 AX: Did that inform you at all of anything about the character?

ASNER: I was drop-dead handsome then. I was delighted. I had no idea I was that good-looking.

AX: Did watching it give you any ideas about how you wanted to play him this time, or is it very different?

ASNER: There’s a certain airiness to the fellow that I made sure to keep, but the script itself dictated that.

AX: The last time we spoke, we discussed the fact that your show LOU GRANT was canceled not because it wasn’t successful, but because some of the sponsors pulled out because they thought you were too politically outspoken. You’ve said you think that corporate sponsorship has gotten more insidious since then …

ASNER: I mean, we learn every day, more and more, that we are the minions of corporate influence in every walk of our lives, so that was just a beginning taste, at that time. To experience it now, in major measures, it’s like Mutt and Jeff.

AX: Is there anything you feel we can do as individual citizens?

ASNER: I think that, in this so-called land of the free press, until the day that people begin to mistrust media, mistrust their government and start to band together in an exchange of ideas and facts, discovered by means other than mass media or government, until we can grow up enough to achieve that, there’s no hope for us.

ASNER: Try to do good things. Join whatever promises to contribute hope to a change affecting the future. Try to be a good person. That’s what’s incumbent on us, in spite of the enormous pressures that surround us.