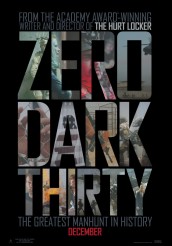 A sharp, persuasive drama about the CIA search for Osama Bin Laden

By now, pretty much everybody knows about the U.S. Navy SEAL raid in the compound in Pakistan that led to the death of Osama Bin Laden, head of Al-Qaeda, which claimed responsibility for the Sept. 11, 2001 attacks on the U.S.

What most people don’t know is exactly how the compound was found, how long it took and how it was determined to be the residence of Bin Laden. ZERO DARK THIRTY climaxes with the Seal Team Six nighttime raid (“Oh-dark-thirty” is the military term for 12:30 AM), but before that, director Kathryn Bigelow and writer Mark Boal, give us a chronicle of what led up to this.

We see much of ZERO DARK THIRTY through the eyes of CIA field agent Maya (Jessica Chastain), who has spent her entire adult life working for the CIA, and most of that time trying to find Bin Laden. We meet Maya as she arrives at a CIA “black site” outside the U.S., where “enhanced interrogation” (torture) is permitted. Maya watches as experienced interrogator Dan (Jason Clarke) does truly horrendous things to prisoner Ammar (Reda Katteb) in the name of getting information. Ammar begs Maya for help when they are alone; Maya tells him, “You can help yourself by telling the truth.”

This aspect of ZERO DARK THIRTY, in addition to being tough to watch, has proven controversial, as the film depicts torture as a technique that can (albeit very slowly) yield useful information. Many in the intelligence community disagree with this assessment. In any case, the film doesn’t delve into the morality of this, beyond the toll it takes on both prisoner and interrogator. There is a moment of dark humor as the CIA agents watch President Obama on a newscast saying that torture will no longer be used. The alternative the CIA comes up with is more expensive, more effective and a lot easier to live with for all parties concerned (and makes for a bit of levity).

The eventual raid on Bin Laden’s compound, which forms most of the climax of the film, is of course action-packed and thrilling. However, the real demonstration of skill here, as other reviewers have pointed out, is how director Bigelow and writer Boal take what had to be a grueling slog of an investigation and turn it into something that makes us sit up in suspense at every turn. Maya (said to be a composite of several women involved in the investigation) is determination personified and she doesn’t have a lot of patience for even people above her who are hesitant to commit resources to the search.

Outright dread also comes from the unpredictability of the surroundings –Pakistanand Afghanistan are countries where violence can very easily occur in even the safest-looking surroundings, as is shown repeatedly. Even when we realize that we’re about to see a dramatization of a known event in recent history, we’re made to feel as though we’re right on the ground with the characters.

Chastain gives us a real human being who lives for her work. This isn’t the unfortunately all-too-familiar situation of a young actress trying to show us someone with a steel spine, but rather a highly skilled performer who has no inhibitions about finding and revealing a fierce inner drive, along with an occasional bout of despair.

Clarke and Katteb are seamless in their scenes together and James Gandolfini is unexpectedly gentle as the CIA director. Jennifer Ehle is excellent as a colleague who initially disagrees with Maya on tactics but bonds with her anyway and Joel Edgerton is very persuasive as the Seal Team Six leader. TORCHWOOD fans should note that John Barrowman turns up in a small role.

Since many characters are composites, ZERO DARK THIRTY shouldn’t be taken as the last word on the raid on Osama Bin Laden’s compound. However, its depiction of the process by which the compound was ultimately found is richly detailed and feels authentic. There’s no show-boating or wasted time here – this is a case where well-researched art makes us believe we’re watching something that is true.