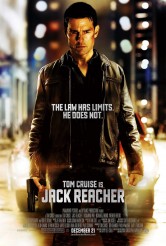 As modern star-driven thrillers go, JACK REACHER is pretty good. Tom Cruise stars as the title character, a former military policeman who went off the grid after leaving the army, only to surface when a fellow former soldier is believed to have gone on a shooting rampage

The opening of JACK REACHER creates some stomach-churning tension, as it involves a sniper (Jai Courtney) shooting and killing five unconnected people. With great forensic expertise, Detective Emerson (David Oyelowo) finds tiny clues that point unerringly to … the wrong man, Barr (Joseph Sikora). While being interrogated by Emerson and district attorney Rodin (Richard Jenkins), Barr writes on a piece of paper that they should get Jack Reacher.

Barr is soon in a coma, but Reacher arrives on the scene, having seen Barr’s arrest on the news. Reacher is not exactly a friend of Barr’s, but he winds up delving into the case nonetheless. Reacher and Barr’s idealistic attorney, Helen Rodin (Rosamund Pike) – yes, she’s the d.a.’s daughter – find there’s much more to the situation that is originally apparent.

Most of the twists are intriguing and surprising, starting with the one concerning why Reacher is so interested in what Barr has or hasn’t done. As long as the movie is concerned with Reacher and Helen’s efforts to find out what’s really happened and why, we’re fairly engrossed. However, once the truth is known, JACK REACHER turns into a relatively standard action movie.

Director/writer Christopher McQuarrie (who penned the original screenplay for THE USUAL SUSPECTS), working from Lee Child’s novel ONE SHOT, does a crisp good job in the opening sequences and never lets the pace lag. For some reason – and perhaps this is something mandated by forces above McQuarrie’s head – there are a number of shots that have Reacher gazing meaningfully just past camera, and close-ups of Helen staring adoringly up at this mysterious, powerful stranger, to the point where this borders on self-parody. We can see that Reacher is a great investigator – we don’t need it underscored, nor do we need to see the man savoring his own mythos.

There’s also a strangeness in the way Helen is presented. Even if the movie, along with Reacher’s character, doesn’t agree with what it is that defense attorneys do, surely Helen ought to be able to do a better job of articulating her own motives.

In other ways, though, JACK REACHER is pretty delightful. It’s hard to complain about a movie that gives Robert Duvall such a swell, fun supporting role or uses director Werner Herzog(!) as a scary bad guy. Jenkins and Oyelowo are both excellent.

The sniping scene at the top is unnervingly well done, and it’s book-ended by a less resonant, more exciting shootout. There’s fun action throughout and a solidly constructed puzzle to solve. It’s not great, but it’s sufficiently entertaining as it goes.