Interview: Joss Whedon chats about THE AVENGERS, S.H.I.E.L.D. and BUFFY at a special event screening Q&A 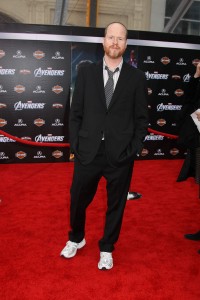 Last night, a special screening of MARVEL’S THE AVENGERS was held at the Director’s Guild in Hollywood which featured a special Q&A hosted by moderator Jeff Goldsmith.

During the nearly 45-minute conversation Whedon spoke about BUFFY, THE AVENGERS and FIREFLY and the fact that the Wasp was originally included in an original draft of the screenplay. He also talked briefly about S.H.I.E.L.D., the new ABC TV series that is a spin-off from THE AVENGERS.

Here are some highlights.

On what Marvel wanted from an AVENGERS movie …

“Marvel was very clear what they wanted to do and they knew it was going to be these guys,” says Whedon. “There were some questions about Hawkeye and [Black] Widow and can we pull that off. The guys who had their own franchises, there was no doubt. They wanted Loki and nobody else. They wanted an alien invasion in the third act. They wanted the heli-carrier attack. I had enough sign posts to build on, and all I had to do try to make it matter and try to have reasons for all the conflicts. The Thor and Iron Man fight, it really is that scene [where he] ‘tells the cop he can’t bust the guy because it’s part of a bigger investigation.’ That’s just that. It’s a conflict, not just a fight and at least they both have a perspective. That was my entire thing, giving everyone a perspective going into the set pieces, so it’s not just punching and fighting.

On other AVENGERS potentially being included …

“I used to read THE AVENGERS [comics] and part of the ethos of the team, they changed their line-up every month,” says Whedon. “Their 150th issue was a bunch of faces, ‘who will be in the team now?’ We had the first issue as a poster in the office, and now that I’m working on the sequel, I’m like, ‘let’s change it up a little and [put the cover of the] second issue up. The second issue says ‘introducing Giant Man.’ They were already changing it up after one issue. There are a bunch of people I grew up loving and there was a bit of a time where we thought we would not get Scarlett [Johansson as Black Widow], so there was a very Waspy draft I wrote [referring to the Avengers character The Wasp]. It was way too Waspy [where I was like] ‘She’s adorable, I’m just going to write her.’” 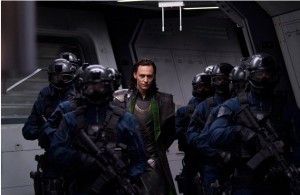 On the possibility of other villains …

“I fought hard to add another villain with Loki and it’s the one battle I lost,” reveals Whedon. “I definitely felt like, I have Earth’s Mightiest Heroes. I have four of the biggest and baddest – the toughest guys out there and I have one effete British character actor [for Loki]. They believed very strongly they didn’t want to add any more mythology. I’m not going to argue. It was very difficult for me to make that work, but the ace in the hole was Tom Hiddleston, because he’s so compelling and commanding and gracious about it. And it became about, ‘Oh, it’s about how he gets in their heads’ and it’s going to be fine. It took me a long time to accept it, because you need someone to hit.”

On struggling to keep the script concise …

“I think [when I got to] page 160, I emailed everyone and said ‘I need help,’” says Whedon. “That was the version that had more than one villain and the Wasp. It was definitely like ‘eek. – I took the job partially, because with WONDER WOMAN [a movie he was attached to], [they were like] ‘any second now, it’s going to be amazing … here we go … oh … it’s never … no.’ I wanted to do my own independent thing unless something came up that definitely was going to be made. It was two years, basically. The first draft took a long time. When I gave the outline, we all know what we want the final battle to be. I wrote a five-act piece, prologue. That’s exactly … fifteen pages describing it, so they could get to work on something while I was still writing. Usually that’s a terrible idea, and we knew what it meant to get there and what it meant to the team and there was very little we had to change.”

On how detailed his scripts are …

“I’m very specific about action when I can be,” he says. “I love gags. I love the math of the visual gags whether it’s comedy or a stunt. When I drop that ball, I drop it hard. BUFFY is the least frightening and least exciting action horror show ever. Face it, it’s a soap opera with fangs. I would be like, ‘okay, two cameras, go, we’ll cut some of the gags, great.’ When I have time, I love, love, love it. With these guys, it was necessary. I had a fabulous team and it has to come from you and the actors. Chris Evans [Captain America] and I had long conversations about his powers. We had to make everything very specific in that way. [The storyboard people] will bring you amazing stuff, they also have the Black Widow leg sweeping an alien. If she tries to leg sweep an alien, she’s going to break her leg. If I can, I write out every scene.” 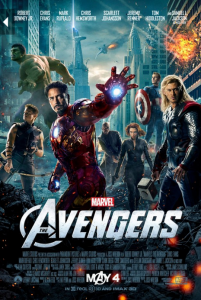 “This is the worst thing you could ever do to yourself,” he says about writing a movie with existing continuity. “After SERENITY I said, ‘I’ll never do this again. I will never again make a movie where some people have seen what came before, some haven’t and all these characters know each other, but I have to introduce them to a new audience. I was like, ‘that was a terrible idea for a movie. My next movie is going to be about one guy. It might be a film called TO BUILD A FIRE. That sounds ideal.’ And then, I’m sitting at my desk [with THE AVENGERS]. I’m like a goldfish. The same thing again and again. It’s unbearable.”

On being a writer-director …

“Once you’ve actually directed and go back to writing, that guy who you always hated is yourself,” he says. “I talked to James Gunn about it. He shot SLITHER the same year I shot SERENITY. [Afterwards] we both had been completely blocked, realizing, the director, had killed the writer in us.”

On the death of Agent Coulson [Clark Gregg] in THE AVENGERS …

“Coulson’s death was mandated in the first meeting by Kevin Feige,” says Whedon. “ I can’t say that enough times. Apparently I have some kind of reputation that we won’t discuss right now, but I do love to kill people. Clark himself said when we were shooting that it was obvious that it had to happen, otherwise all of this becomes irresponsible. There’s no toll or actual downside to this very bad idea of bringing all of these people together. As a film it’s just irresponsible. That’s why we’re bringing him back for a S.H.I.E.L.D. series.”

“We got to do almost everything we wanted to do,” says Whedon. “The only thing we didn’t get to do is an animated version, which was a delight for us because the writers themselves were working on it. We wrote seven scripts … it was ‘what could we not do [on the regular series].’ They were really fun to write. We could not sell the show. We could not sell an animated BUFFY, which I still find incomprehensible.”

Related: First Look at the IRON MAN 3 logo of the Marvel Studios next film

Related: First Look at the THOR 2 logo and title THOR: THE DARK WORLD

Related: First Look at conceptual art and logo of the new Marvel superhero team movie GUARDIANS OF THE GALAXY

Related: The Five Heroes We Want To See in Avengers 2 and 3

Related: Interview: THE AVENGERS Director Joss Whedon captures the essence of the comics