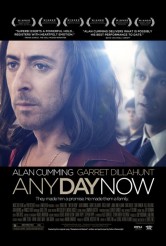 It should be said upfront that this reviewer agrees completely with the underlying premise of ANY DAY NOW, which is that parentally fit gay people should be able to adopt children. In California, at least, the law seems to have caught up with this notion since the time the film takes place, which is 1979 through the early 1980s. Furthermore – and here the law has not caught up, though common sense has – there are times when minors are infinitely better off with concerned, caring non-family members than a biological parent who is struggling with addiction.

At the same time, Rudy is in danger of being kicked out of his fleabag apartment. His down-the-hall neighbor is a prostitute who perennially neglects her fifteen-year-old son Marco (Isaac Leyva), who has Down Syndrome. Rudy feels a sense of kinship with Marco and looks after him. Then Marco’s mom gets busted, the authorities try swoop in and take Marco away and Rudy prevails on Paul to do something. This results in Paul inviting Rudy and Marco to move in with him – as Rudy is being evicted and Marco has to have some kind of stable residence – and Paul getting Marco’s mom to sign over her parental rights for the duration of her jail sentence.

However, the screenplay by director Travis Fine and George Arthur Bloom, adapted from a script Bloom originally wrote in the ‘80s, has neither the benefit of contemporary hindsight nor the verisimilitude of the kind of freewheeling under the radar society of the period that ANY DAY NOW seeks to depict. The film feels as if it was made by very well-intentioned crusaders who are so anxious to be supportive that they don’t notice when they’ve stacked the deck too high.

Yes, homophobia was virulent even in California back in 1979. Kids were getting taken away from gay biological parents. So why create a fictional framework that would make just about anybody question the legitimacy of the situation? Rudy in legal terms kidnaps Marco and then they both move in with Paul after Rudy and Paul have had only one date. Paul acts as his own lawyer and lies in court. We’re meant to see the court as being homophobic – the judge and prosecution are shown to be closed-minded, despite the fact that Marco is flourishing in school and is receiving good care – but with the above scenario, it’s hard to see even the most progressive court on the planet not wondering what the heck is going on here.

In fact, it’s all a bit too much. There doesn’t seem to be any valid dramatic reason for Rudy to move into Paul’s place immediately, except to paint Rudy as a bit of a self-righteous bully and Paul as something of a pushover. Handled differently, this might add depth and dimension to the story, but here it feels more like rushed storytelling. The finale feels plausible, but it also seems to belong to a movie with a different overall texture.

ANY DAY NOW has its moments and some terrific acting, but it’s also a new movie that feels as though it had been made thirty years ago, back when people wanted to talk about social injustice, but were a lot less articulate on the subject.