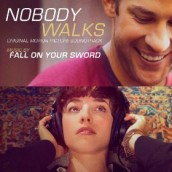 One of the most interest alt. score duos to arrive on the Hollywood scene since Tom Hajdu and Andy Milburn went by the name of Tomandandy for KILLING ZOE, the Brooklyn-based collaborative of Will Bates and Phil Mossman have given themselves the not-so easily identifiable moniker of Fall On Your Sword.

With their own impressively uniquely combination of rock-based percussion and hypnotic minimalism, Sword seemingly struck from nowhere with the surreal sci-fi score of ANOTHER EARTH before getting slightly more down to our planet to chronicle the screwed-up relationships of 28 HOTEL ROOMS, GENERATION UM… and LOLA VERSUS. But playing romantic ennui takes on a whole new eccentric layer when set in a La-La Land where NOBODY WALKS.

For the adulterous passion that arises between an art film director and the married sound designer whose Silver Lake pad she crashes at, Sword captures an existential vibe that isn’t so much about conveying palpable emotions of love and hurt as it is the whole independent scene, especially when the magic of sound design is a key factor in the story. Though always offbeat, Fall On Your Sword’s music is more than approachable, whether it’s going for glistening rock rhythms or slow erotic burns. Yet for all of their borderline experimental stylings, Fall On Your Sword also demonstrates an equally impressive talent with more traditional melodies for the piano and violin. Certainly one of the most interesting, dreamily rhythmic scores to play the city of self-absorbtion since Tangerine Dream’s HEARTBREAKERS, Fall On Your Sword’s work for NOBODY WALKS is what that German band might have mutated into in an age of Hollywood hipster hedonism.

Click on Link: To Purchase the NOBODY WALKS soundtrack