However you thought the season would end, we promise you, this episode is well-titled 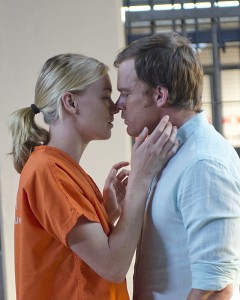 After a year that’s been intense even by DEXTER’s fierce standards, the Season 7 finale “Surprise, Motherf****r!” lives up to its title. The climax is practically Shakespearean tragedy, though if you guessed exactly what would happen, you should immediately go pick lottery numbers.

Dexter (Michael C. Hall) visits girlfriend Hannah (Yvonne Strahovski) in prison. Hannah is hurt that Dexter chose his sister Deb (Jennifer Carpenter) over her, but says if Dexter will just get rid of the one tangible piece of evidence against Hannah – the pen with her DNA – she and Dexter and Harrison can run off together. Dexter explains the problem is that neither can trust the other. He misses Hannah, though, and almost breaks down crying in front of her.

At Hannah’s hearing, she gets her friend Arlene (Nicole LaLiberte) to slip her a pill. The result is that Hannah goes into convulsions, is rushed to the hospital – and of course escapes. She leaves a plant by Dexter’s doorstep.

Dexter hasn’t seen the plant by the episode’s end, though, because he’s been dealing with other issues. For starters, Captain LaGuerta (Lauren Velez) has Dexter arrested for the murder of Hector Estrada (Nestor Serrano), which is ironic, considering that Estrada actually got away from Dexter. However, LaGuerta’s physical evidence against Dexter winds up making it look like LaGuerta attempting to frame him. Everyone in the department (except Deb, who privately knows better, but is publicly outraged) thinks LaGuerta has lost her mind. Dexter is released and LaGuerta’s career looks like it’s circling the drain.

Dexter feels the need to kill Estrada before LaGuerta can find him and get him to testify about Dexter’s previous attempt on his life. While Dexter is stalking Estrada, LaGuerta calls Deb into her office. LaGuerta has been sent a DVD, among the personal effects of the late Detective Mike Anderson, that shows Deb at a gas station filling up a gas can, two blocks away from where a fire obscured details in the death of Travis Marshall. LaGuerta now suspects Deb of, at minimum, helping Dexter cover up his crimes. Deb goes to Dexter.

Dexter flashes back to early days (Seasons 1 and 2), when Sergeant James Doakes (Erik King) knew there was something wrong with Dexter. Dexter is now inclined to agree. For those confused on the point, Dexter framed but did not kill Doakes, as Doakes did not fit the Code. Doakes was murdered by Dexter’s then-lover Lila. Talking to himself – and the shade of Harry (James Remar) – Dexter comes to the conclusion that he’s going to have to kill LaGuerta, even though she is innocent and in no way fits the code. Dexter cannot bear to have Deb be blamed as an accomplice.

Dexter captures Estrada and forces him to call LaGuerta, luring her out to the docks where Dexter has a kill room set up in an empty cargo container. Estrada tries to talk Dexter out of killing him, saying that Dexter’s mother was a snitch and Estrada had to kill her as a means of survival. Dexter thinks upon the fact that, until now, he didn’t kill for reasons most other criminals kill. He kills Estrada. When LaGuerta enters the container, Dexter comes up behind her and gives her his usual knockout serum.

Deb has found out where LaGuerta was going and arrives in time to hear a gunshot. She races into the container. Estrada is dead and LaGuerta is unconscious on the floor. Dexter has shot Estrada with LaGuerta’s gun and is planning to shoot LaGuerta with Estrada’s gun to make it look like they killed each other. Deb begs Dexter not to do it. She has her own gun out. LaGuerta comes to and tells Deb that she’s a good person and that she should shoot Dexter. Dexter, realizing the situation, drops his knife and tells Deb it’s okay, LaGuerta’s right and Deb should do what she has to do. Deb, sobbing, shoots … LaGuerta. Still crying, Deb embraces the woman and fellow officer she’s just murdered in order to save Dexter and …

Dexter and Deb show up at Batista’s (David Zayas) retirement/New Year’s Eve party because they’re expected to be there. Both are attempting to look normal, and both are clearly in shock. Dexter wonders in voiceover if Deb will still be Deb after this.

And the season ends, and we are not just surprised, but shocked motherf****rs. It’s been clear that ultimately Deb and Dexter put each other above everyone else – Dexter was even willing to send Hannah to jail to protect Deb and Deb has been compromising her principles all season long to protect Dexter, but this lethal GIFT OF THE MAGI twist, with Dexter about to sacrifice his stated code and Deb breaking every known rule she has to save Dexter, goes beyond anything we might have imagined. Well, actually, we could imagine Dexter killing LaGuerta and this reviewer watched the scene up until LaGuerta’s death afraid that Deb might kill herself, but Deb committing murder – of her police captain, no less – was an unforeseen outcome.

However, the finale has been built up to brilliantly. The surprise element lies not (as it does in some other thrillers) in well-planted clues but rather in human nature going to places we know exist but don’t readily acknowledge.

Velez is so good and has been such a vital part of the series that it’s a shame to see her go. Maria LaGuerta was a wonderfully complex character, able to startle us with decency once in awhile when she wasn’t conniving, backstabbing and generally making life miserable for everyone around her.

Meanwhile, it’s unknown just what Deb will be like next season – reportedly DEXTER’s last – and how Carpenter will play her. Doubtless the aggrieved Hannah will be pivotal in the proceedings as well.

“Surprise, Motherf****r!” has an impact well beyond its considerable jaw-drop factor. We genuinely grieve for Deb, as we would for a friend who has been in a terrible accident and is now irreparably damaged. Carpenter has made her so real that it feels like we’ve lost something as well. And Dexter – Hall is sublime. Our chief worry for him – and it’s likewise substantial – is how much we’ll miss him and his show when they’re finally gone.