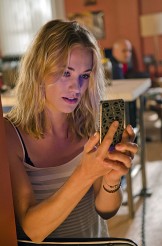 Some gentle surprises in another strong episode 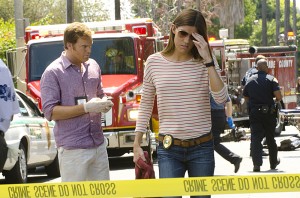 Remember when vengeful Ukrainian mobster Isaak Sirko (Ray Stevenson) told Dexter (Michael C. Hall) that under other circumstances, they could have been good friends? Well, welcome to those circumstances. In the best tradition of DEXTER, “Helter Skelter” surprises us right along with our main character. Meanwhile, Debra (Jennifer Carpenter) blessedly finds her center again, LaGuerta (Lauren Velez) starts playing hardball in unexpected arenas in her search for the Bay Harbor Butcher and there’s a new serial killer on the loose.

Knowing that the Kashka Brotherhood has sent two more assassins after him, Isaak realizes he’s going to need help taking these guys out if he’s going to survive. But who does he know who’s good at killing people? Hmm … Of course, Dexter isn’t immediately inclined to help Isaak. This is why Isaak has kidnapped Hannah (Yvonne Strahovski) and stashed her with his loyal aide Jurg (Andrew Kirsanov).

Dexter and Isaak have a confrontation, but not one that ends in bloodshed. With Isaak poking Dexter about his relationship with Hannah and how lame Dexter is when he talks to Hannah to verify that she’s still alive, Dexter fights back. He tells Isaak that Isaak knows deep down that it’s Isaak’s fault Viktor (Isaak’s lover, killed by Dexter) is dead. Isaak sent Viktor to Miami, where Viktor was over his head. And Dexter is right.

Dexter takes out one of the assassins and lures the other into the open where Isaak shoots him. Isaak turns out to be a man of his word and lets Dexter go. However, before Dexter can leave fellow Kashka Brotherhood member – and strip club manager – George (Jason Gedrick) shows up and shoots Isaak. George flees before Dexter can take him out. Dexter offers to take Isaak to the hospital, but Isaak knows he is dying. He asks Dexter to take him out and dump his body where Viktor’s body was dumped. While Isaak is dying, Dexter asks him if Isaak feels that loving Viktor was worth this result, and Isaak says it is. He urges Dexter to stop being afraid of loving Hannah. (Of course, there are a few things about Hannah that Isaak doesn’t know …) Dexter looks actually sorrowful when Isaak passes away.

On the Deb/Dexter front, Dexter tries to make it okay that Deb told him she loved him, pointing out that the two of them have endured together through all kinds of horrendous events. Deb realizes this is true.

Hannah manages to poison Yurg. He stabs her, she beats him to death with a lamp. Dexter (otherwise occupied with the Isaak situation) gives Debra the address. Deb finds that Hannah is still breathing – and grudgingly calls an ambulance.

At the hospital, Dexter is visibly happy and relieved to see Hannah. He tells her he feels safe with her – but from the look on Hannah’s face, we’re not sure this is a good thing.

In other news, Miami Metro is on the trail of a new serial killer who burns his victims to death. George coerces stripper Nadia (Katia Winter), who is the girlfriend of Joey Quinn, to have sex with him as revenge on Joey for not calling him back. This backfires when Joey shows up at the club – instead of being intimidated, Joey beats the (insert Deb’s expletive of choice here) out of George and takes Nadia away from the club.

Finally, LaGuerta tracks down her old boss, former Police Captain Tom Matthews (Geoff Pierson), who correctly blames LaGuerta for getting him fired. However, he’s willing to help her track down the Bay Harbor Butcher if she can get him reinstated long enough to get his pension back.

Meanwhile, Strahovski is proving to be an actress of grace and subtlety. She still has the wholesome demeanor that made her so lovable on CHUCK, but there’s something furtive and defensive lurking beneath the surface in Hannah. When Dexter finally does open up to her, Strahovski, just using her eyes, lets us wonder if this is what Hannah wants, or if this is the first step in her feeling so trapped that she may kill to free herself.

And as just about always, Carpenter is solid as Deb. When she saves Hannah rather than letting her die, Deb also saves herself – this is who she is, she knows it and she knows she hasn’t been totally knocked off-center by the revelations about Dexter.

Matthews in seasons past has been an authority figure we love to loathe, so his return promises whole new dimensions of trouble, and the new serial killer plot seems to be a way for Dexter to get his groove back.

The episode may be entitled “Helter Skelter,” but it is in fact the opposite: painstakingly intricate in design and wonderfully effective in completed form.