Home » dexter review the dark whatever 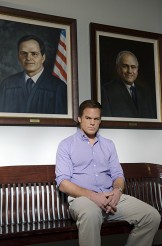 Another intense episode, with Jim Beaver guesting as Hannah’s dad 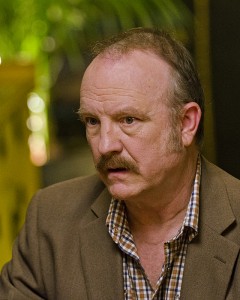 Season 7 of DEXTER has been full of stunning moments. These are downplayed a bit in “The Dark … Whatever,” but present nonetheless. Dexter actually inverts his code, letting a serial killer live and killing a non-homicidal (though reprehensible) criminal, at the same time committing an act that may come back to bite him.

The episode takes its title from Hannah’s (Yvonne Strahovski) bemused reaction when Dexter (Michael C. Hall) tries to explain about his “dark passenger.” Hannah is a killer, but she’s never tried to tell herself that some other part of her is in control when she commits murder. She tries to get Dexter to accept that he is in control of his own actions after all.

Despite his promise to Deb (Jennifer Carpenter) that he won’t take cases away from Miami Metro Homicide, Dexter tracks down young murderer Joseph Jensen (Mike Foy), who has been setting his victims on fire all around Miami, including a mother and her six-year-old child. When Dexter gives Joseph on the table, Joseph blames his actions on childhood friend Bobby, who died in a fire he set, although Joseph was blamed. As Dexter lectures Joseph on needing to take responsibility for his own actions, our hero realizes he might as well be talking to himself. The result is that Dexter simply knocks Joseph out, but leaves enough clues around for Miami Metro to deduce he’s their killer. Debra is grateful – but tells Dexter she’s not so grateful that she plans to leave Hannah alone.

Hannah’s long-gone father Clint (Jim Beaver) turns up after doing a stint in jail for check forgery. Clint is at first apologetic and friendly, but when he wants $20,000 from Hannah, ostensibly to start a crawfish business, Hannah gently refuses and Clint gets verbally vicious, then storms out. He comes back later, drunk, and puts his truck through Hannah’s greenhouse. Hannah is devastated and Dexter throws Clint off the premises. Clint, obviously not a very good judge of character, shows up at Dexter’s apartment just as nanny Jamie (Aimee Garcia) is taking Dexter’s young son Harrison out for a swim. Dexter doesn’t want Clint anywhere near Harrison, Hannah or anyone else he knows. Clint tries blackmailing Dexter, saying that Hannah killed a counselor after she got out of juvie, and that her still-living onetime roommate knew about it. Still flush with the realization that the “dark passenger” is just a figment, Dexter decides that he wants to kill Clint and does so, though he lies to Hannah about exactly why her father won’t be back. Hannah tells Dexter she loves him and Dexter says he thinks he loves her, too.

It turns out that Clint already left an anonymous tip for theMiamicops about Hannah’s old roommate, and Debra is going to look into it.

Meanwhile, LaGuerta (Lauren Velez) continues to investigate the Bay Harbor Butcher and her suspicions of Dexter increase. Former police captain Tom Matthews (Geoff Pierson), who is working with LaGuerta, is quite sure she is wrong, but tells Dexter of LaGuerta’s theories.

Meanwhile, Russian mobster George Novikov (Jason Gedrick) threatens Detective Joey Quinn’s (Desmond Harrington) girlfriend Nadia (Katia Winter) one too many times. Quinn shows up at the nightclub, goes into George’s office and winds up shooting him. Quinn acquires a bullet wound in his arm, per his instructions to a horrified Nadia. Batista (David Zayas) is doubtful of Quinn’s account that George shot first, but agrees to back up his partner.

On this last plot point, it’s unclear if this is going to somehow swing back to Dexter – nobody expects the Kashka Inquisition! – or simply create more trouble for Quinn and maybe Batista.

Dexter empathizing with another killer who blames childhood issues for his actions makes sense. On the other hand, unlike Joseph, Dexter has always taken responsibility for his own actions. He does sort of hear voices – the shade of adoptive dad Harry (James Remar) is always there as a sounding board – but Dexter has seldom felt out of control. Therefore, Dexter’s epiphany about his Dark Passenger doesn’t carry much weight – Dexter may feel a little saner, but it doesn’t look like his actions are going to change much. It’s one of those rare moments in this season of DEXTER that looks bigger than it actually is; to be fair, most of the big moments this season have been gargantuan.

Yes, Clint doesn’t entirely fit Dexter’s profile (so far as we and Dexter know), but he is threatening to ruin Hannah even more than he has already and he’s an abominable father – and he talked to Harrison. The timing of the epiphany and Dexter killing Clint seems therefore more coincidental than causal.

This actually isn’t the first time Dexter has broken code. So far, the freakout he had at the beginning of Season 5, when a rude trucker insulted Dexter’s wife just after Rita’s death and Dexter lost it and stabbed the guy to death in a gas station men’s room, has never come up again. It might be worth noting, at least on Dexter’s part, that he is capable of unpremeditated lethal violence. Since Dexter apparently left his fingerprints all over the scene, he also might want to worry that this may come back to bite him some day.

Actually, Dexter allowing Joseph to live when Joseph has recently burned a six-year-old child to death seems a bit of a bigger stretch, but if Dexter is experiencing a bit more empathy at the moment – he’s also identified in various ways with Hannah and the late Isaak – then that’s probably not a bad thing.

Beaver does a great and versatile job as Hannah’s dad, absolutely likable at the outset and utterly loathsome by the end. Fans of Beaver as Bobby on SUPERNATURAL may be amused by the fact that the arsonist, known for most of the episode only as the Phantom, keeps the mysterious tag “It’s Bobby” at the crime scenes. (This presumably is random, but perhaps it’s an in-joke.)

Of course, there’s growing suspense around what LaGuerta will find out, what Deb will do and what Dexter will do, but that seems to be at a slow boil.

“The Dark … Whatever” is a strong building-block episode; it just doesn’t have the ferocity of some others that have preceded it this year.