©2012 Nickelodeon
IT'S A SPONGEBOB CHRISTMAS
Interviews 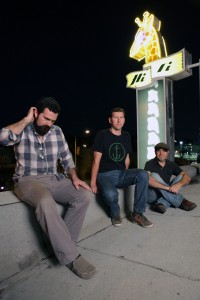 For over thirteen years, SPONGEBOB SQUAREPANTS has been a Nickelodeon cartoon staple and even though there have been Christmas episodes over the years, there’s never been a stop-motion Christmas special.

That’s all changed with IT’S A SPONGEBOB CHRISTMAS! which takes the little sponge who lives under the sea and forces him to deal with Plankton’s evil plan to turn everyone into a jerk for Christmas.

The special already aired on CBS and will be making its Nickelodeon debut tonight.

ASSIGNMENT X spoke with co-directors Seamus Walsh and Mark Caballero as well as producer Chris Finnegan about the complicated process in rethinking SpongeBob for an entirely new medium and why Santa looks so tired in the special.

ASSIGNMENT X: How difficult was it translating the 2D Spongebob characters to stop motion?

SEAMUS WALSH:  It was definitely a challenge, but we like these kinds of challenges. The most important thing is to capture the spirit of the character, not necessarily a literal copy of the 2D.  Puppets have their own kind of energy and you have to be careful about what to include and what to leave out.

We actually love to translate 2D characters. In the past we’ve done quite a few, but among those, SpongeBob and the Flintstones were definitely favorites.

AX: What was the most difficult character to bring to life, and what did you have to do in order to achieve that?

MARK CABALLERO:  Each had it’s own special challenges, but SpongeBob was probably the most difficult just because of the sheer number of parts that needed to be made.  We wanted to retain as much of that squashy-stretchy goofiness as possible, so he had dozens of replacement parts, like arms, noses, even various sizes of cheeks and freckles.  Of course, as the main character, you really want to make sure he will charm the audience, which brings a special kind of pressure. 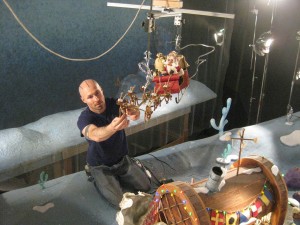 AX: Which was the easiest character to bring to life and why?

WALSH:  None of them were easy, exactly… maybe Patchy the Pirate, because he has the most humanoid proportions.

AX: What were the other challenges of creating the world of Bikini Bottom in stop-motion animation?

CABALLERO:  We didn’t want to make exact sculptural copies of the cartoon drawings and layouts, just because it might’ve ended up feeling too “perfect” or something.  So we chose to re-appropriate real world objects as much as possible.  Our art director, Kelly Mazurowski spent a lot of time digging through salvage yards, picking intriguing pieces and then put them together in creative ways.  We saw it as “puppetizing” the world of Bikini Bottom.

AX: How long did it take to create the special?

CHRIS FINNEGAN:  It took about five months to shoot, with a couple of months on either end for R&D and post.

AX: How much research went into copying the style of the classic stop motion animated cartoons? Did you give into that style 100 percent or did you sneak in some modern technology tricks?

CABALLERO:  Well, we are heavily immersed in that particular Arthur Rankin and Jules Bass style [creators of the original RUDOLPH THE RED-NOSED REINDEER]. They are big heroes of ours. In fact, we were lucky enough to be chosen to restore the original puppets from that special when they were unearthed a few years ago.  So we tapped into that knowledge for sure. We definitely use modern tricks, though. We shot everything with digital cameras directly to the hard drives of our iMacs. 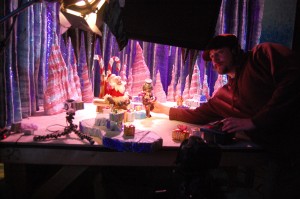 AX: What sequence are you most proud of with the stop motion animation?

WALSH:  The opening song sequence, “Santa’s Eyes” is one of our favorite parts because animating to music is our favorite way to animate.  And it’s a jaunty little number. SpongeBob dances along, meeting all the main characters one by one.  It came out pretty charming.

AX: And was there a sequence in the special that you were unsure was going to work, but somehow you found a way to make it work?

CABALLERO:  One of the last shots we did was the shot of the Tastebuds with a torrent of fruitcake washing over them. We ended up creating an oversized mouth interior and made these little “buds” with flappy mouths so they could cheer as the fruitcake washes over.  We emptied about 25 boxes of Cocoa Puffs into a trash can and poured it in there over the tongue puppet.  It was pretty surreal and in the end we were covered head to toe with cocoa dust.

AX: Do you find it ironic that in a world of CGI animation, that these decades old 2D and stop motion animated Christmas specials still find an audience generation after generation?

WALSH:  Oh yeah, it’s great.  It’s because you can’t deny the charm and unpretentiousness of these films.   They’ve earned their classic status. 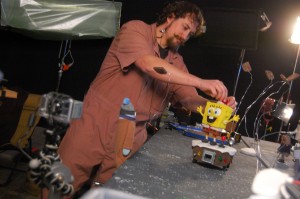 AX: What was up with Santa? That had to be the scariest looking cartoon Santa I’ve ever seen in a cartoon? What was the thought that went into creating him in that way?

WALSH:  We definitely wanted to keep an element of strangeness, almost scary aspects in the story.  If you think about all the great Christmas stories, going back to Dickens’s A CHRISTMAS CAROL, it’s full of ghosts and the skeletal hand of the Ghost of Christmas Future, Rudolph has the Abominable Snowman which scared the hell out of me as a kid.

CABALLERO:  We went with this tired, grumpy, very strange looking Santa.  There is one board, not sure if [storyboard directors] Marc [Ceccarelli] or Luke [Brookshier] drew it, where they had him looking pretty tired. We thought that was a great idea. So we came up with our own little back story where Bikini Bottom is the last stop for Santa.  He’s tired, he wants to get home, take his shoes off. You could see it in his face, “Let’s get this over with.” We thought, “Well, you know, he probably would be tired after that whole trip around the world.”  We honed in on the old descriptions of Santa being a jolly old elf.  We pictured him as humanoid, but not necessarily directly human.

WALSH:  It was a budget cut. It’s totally doable, but it pretty much doubles the time it takes to animate those scenes, and there just wasn’t time for that on this schedule.

AX: Was this originally envisioned as a CBS special first and not a Nickelodeon one? And if so, did CBS request anything specific to make it more appropriate for a prime time audience?

CABALLERO:  I believe the CBS deal came along later. We were stoked when we heard the news. Mainly because most of the classic Christmas specials like RUDOLPH, FROSTY and A CHARLIE BROWN CHRISTMAS) air on that channel. To be included in that line up was far out!

AX: Is the idea that this Spongebob special will be an annual special to run on CBS and then encore on Nickelodeon?

WALSH:  We hope so.  The reviews have been pretty good so far. Hopefully this will become a new tradition.

AX: Is there anything else you would like to add?

CABALLERO:  Sometimes we have to pinch ourselves to remind us how lucky we are to work with such an odd and cool form of filmmaking.  With all those games, cable channels and over the top blockbusters out there, it’s nice to know people dig our stories.  Whoopee!