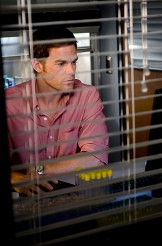 Dex and Deb both surprise themselves in a game-changing episode 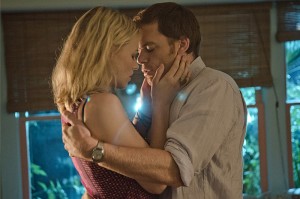 There are certain things we have come to take for granted about Dexter (Michael C. Hall) and his sister Debra (Jennifer Carpenter). He will want to kill every serial killer he encounters, and she will never be entirely all right with this.

Welcome to “Chemistry,” which leaves us slack-jawed a few times, as both Dex and Deb cross lines we never imagined they’d breach. In Dexter’s case, after not killing and then bedding fellow (but less rule-bound) serial killer Hannah (Yvonne Stahovski), Dexter continues to see her after he’s determined that this is dangerous for both of them. He protects her from scrutiny and even sleeps with her again after she poisons true-crime writer Sal Price (Santiago Cabrera), who drops dead in an apparent heart attack in Dexter’s living room.

Meanwhile, Debra is increasingly frustrated in her efforts to prove that Hannah’s late husband was in fact a victim of poisoning by his wife. Similarly, Debra can’t get an exhumation order for Hannah’s former boss, who Hannah apparently killed in order to get her flower and plant business. Additionally, Debra goes on a date with Sal, who is researching Hannah’s past. When Sal dies, Debra has had it – and, unaware of Dexter’s relationship with the prime suspect, asks her foster brother to “do what you do,” i.e., go ahead and kill Hannah.

There are other plot developments leading up to this, including the fact that Detective Joey Quinn (Desmond Harrington) is pressured by the Ukranian mob into destroying the blood evidence linking Isaak Sirko (Ray Stevenson) to the killings in the bar. This means Isaak goes free, enraging and frightening both Debra and Dexter, as Isaak has made it perfectly clear he intends to kill Dexter.

This last leads to another great scene between Dexter and Isaak. Hall and Stevenson play opposite each other masterfully, both aware that their characters are equal in self-assurance and wariness. Dexter knows what he’s up against and Isaak suspects Dexter’s darkness; they are like two kings having a final confrontation before their armies go to war.

However, even this pales in comparison to Dexter’s astonishment at having romantic chemistry (hence the episode’s title) with another person. He contrasts Hannah with his other relationships – psycho Lila (Jaime Murray), loving and unsuspecting wife Rita (Julie Benz) and traumatized Lumen (Julia Stiles). Hannah is unlike any of them; she sees Dexter’s duality and simply accepts it without needing it to either blossom or wither. Dexter also simply finds her compelling and doesn’t know what to do with the ensuing emotions, or the increasing pile of incriminating matters around him.

As for Deb, our hearts break for her. She has clearly hit the point where she’s ready to sell her soul, and Carpenter lets us feel the weariness, confusion, desperation and rage that have driven her to this point.

The most wonderful part of “Chemistry” is that our leads can go to such unexpected extremes and yet not stray out of character. Dexter Morgan and Debra Morgan are truly that dimensional and DEXTER is truly that good.