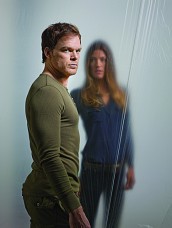 A great start to the new season

Speaking as a great fan of DEXTER overall, this reviewer had a number of problems with the sixth season. However, the season finale ended on such a note of “Holy !!!!” that it almost didn’t matter what preceded it.

Given this preamble, Season 7 hits the ground running with “Are You …?” The episode opens with a tease that suggests that Dexter (Michael C. Hall) is fleeing the country after being caught in the act of killing someone by his adopted sister, Miami Metro Police Lieutenant Debra Morgan (Jennifer Carpenter), much to their mutual horror.

It turns out that Dexter is simply going to a little more trouble than usual to take out a killer, Viktor (Enver Gjokaj), who has just murdered Metro detective Anderson (Billy Brown). Viktor has ties to the Eastern European mob, something that will doubtless factor in to the rest of the season.

However, most of “Are You …?” deals with Dexter trying to figure out how to placate Deb, and Deb trying to make sense of what she has seen. Dexter spends much of the episode trying to convince Deb that his killing of Travis (Colin Hanks) was a one-time act, sparked by fury that Travis had tried to kill Dexter’s toddler son Harrison. Deb wants to believe this and winds up helping Dexter conceal/destroy evidence. However, the more Deb digs, and simply reasons (how is it that Dexter is so adept at cleaning up a murder site?), the more she suspects. Finally, she confronts Dexter with the box of blood slides he keeps as souvenirs of his kills. Deb asks, “Are you a serial killer?” and Dexter finally acknowledges, “Yes.”

There are other elements to the episode, including a ramp-up of the threat posed by Dexter’s unstable admirer Louis (Josh Cooke), and Batista (David Zayas) and Quinn (Desmond Harrington) continuing to wrestle with how to handle Quinn’s alcoholism. The introduction of Ray Stevenson as a villain also suggests something new, as it looks like we may get Dexter vs. the Russian mob. However, the main thrust of the episode is Dexter and Deb wrestling hugely with the conflict between their instincts and their loyalty to one another.

There is a lot of good character logic in “Are You …?”, with Deb recalling what seemed at the time an incomprehensible between Dexter and the Ice Truck Killer (also Dexter’s biological brother, also Debra’s boyfriend) and Dexter flashing back to Harry’s (James Remar) concerns about Debra ever guessing Dexter’s true nature. It helps that by the time Deb realizes that Dexter’s killing Travis wasn’t a one-off crime of passion, but rather simply the latest piece in a long pattern, Deb has so compromised herself in destroying evidence that she can’t come forward without losing her job and her freedom. It’s no longer simply family vs. duty, but family plus self-interest tilting the scales.

Despite some dream sequences and promos, it’s hard to imagine Dexter would intentionally harm Debra. Not only is she the person closest to him, but it’s also against Harry’s code (to say nothing of the fact that she’s Harry’s biological daughter and Dexter’s adoptive sibling). Dexter seems wholly comfortable with the code right now – he deviated from it in trying to save Travis, got a bad result, and has therefore proven to himself that the code is correct. Anxiety about Deb aside, Dexter is actually in a good place, so much as a driven serial killer can ever be said to be thus.

How this is all going to play out, including whether all the plot strands – Deb knowing the secret, angry mobsters, Louis scheming away – will weave together or unfurl separately remains to be seen, but DEXTER’s seventh season is off to a strong, engrossing start.