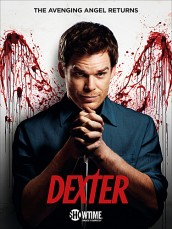 In real time, it’s only been a TV season, but on DEXTER, about two years have passed since we last saw Miami’s most prolific serial killer, blood spatter expert, widower and father Dexter Morgan (Michael C. Hall). Dexter begins Season Six loving his young son Harrison and fond of his police detective sister Deborah (Jennifer Carpenter), but otherwise cut off from and cutting into humanity in about equal measure.

Dexter actually seems fairly content when we catch up with him. He’s still killing other killers – he does a creatively good job of trapping two ambulance drivers who have been trafficking in human organs – but his primary conscious worry right now is getting Harrison into pre-school.

Batista (David Zayas) has recommended the school his daughter attended previously. It’s a Catholic school, with images of the Crucifixion everywhere. Dexter hasn’t thought much about religion before, but now he’s pondering it. It doesn’t make sense to him, but this doesn’t mean it might not be helpful to Harrison, whose life Dexter wants to make as good as it can be. Dexter uses the event of his high school reunion to stalk and kill a former classmate, an ex-high school football star who married, beat and ultimately murdered one of the few girls in Dexter’s teen years who was kind to him. The former gridiron hero’s belief in God juxtaposed with his clear lack of remorse in murdering his wife serves to whet Dexter’s curiosity about Christianity, and he winds up enrolling Harrison in the Catholic pre-school.

We also see two men, one older (Edward James Olmos) and one younger (Colin Hanks), approach an isolated fruit cart vendor. Later, Dexter and Deborah wind up working the case of the fruit vendor’s murder – he’s been disemboweled, with an Alpha/Omega symbol tattooed on his chest and seven live snakes sewn into his stomach. The religious symbolism here looks likely to tie into Dexter’s quest, and the case seems like it will provide the seasonal arc.

In other news, LaGuerta (Lauren Velez) has divorced Batista but promotes him to her old job after blackmailing her way up to the rank of captain. Masuka (C.S. Lee) is teaching college students about forensics. Batista’s younger sister Jamie (Aimee Garcia) is Harrison’s new babysitter. Deborah’s live-in boyfriend and detective partner Quinn (Desmond Harrington) is getting ready to propose to Deb, but he’s foiled when the two of them become involved with tackling a man who walks into a nightclub and starts shooting.

After the angst at the start of Season Five with the murder of Dexter’s wife Rita (Julie Benz) by the Trinity Killer (John Lithgow), it’s sensible to start Season Six on an entirely different note. Dexter is calm and contented (for him) – he’s almost in the same position as the audience as far as wondering what all this new information means, except that we know who is behind the grotesque murder of the fruit vendor (though we’re equally in the dark as to motive). Putting some time between the traumatic events of Seasons Four and Five and the current season also makes sense as far as allowing Dexter to lighten up without diminishing the impact of what has come before.

On the other hand, there’s also less urgency at the outset. We know that in a series that becomes as complex over its seasons as DEXTER does that a lot of groundwork must be done before things get intense, but we can hope things get more intense before too much more screen time passes.