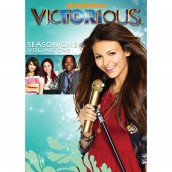 The other Nickelodeon series created by iCARLY’s Dan Schneider is for older Tweens, but just as entertaining

While Dan Schneider has found success with Nickelodeon over the years with DRAKE AND JOSH and ZOEY 101, it was iCARLY that really gave him some mojo and parent cred for his incredible strange sitcom about an internet web show hosted by two Tween girls.

It’s a concept that could have been unbearable, but it grew into a gargantuan hit and continues to surprise with its offbeat storytelling.

Capitalizing on that success Schneider launched VICTORIOUS last year around Victoria Justice who had a guest appearance on iCARLY awhile back.

Justice is a very likable and endearing performer (and also a pretty decent singer) and VICTORIOUS was tailor made for her and her talents. In the series she plays Tori Vega who is accepted into the prestigious Hollywood Arts school. There she’s surrounded by a whole assortment of colorful characters including her talentless sister Trina (Daniella Monet), ventriloquist Robbie (Matt Bennett) who doesn’t go anywhere without his dummy, the flighty Cat (Ariana Grande), bitchy Jade (Elizabeth Gillies), fast talking Andre (Leon Thomas III) and Jade’s boyfriend Beck (Avan Jogia).

The series is primarily centered around performances (both singing and acting) spearheaded by their hippie-esqe teacher Mr. Silkowitz (Eric Lange).

The series got off to a rocky start – trying to find its voice and figure out how to navigate all these characters, but about half way through the these episodes, Schneider’s goofy sense of humor starts to really shine.

While skewing a little older than iCarly, the series really grow on you and it’s the “Tori the Zombie” episode that really extends the show’s premise into something quite different and fun (Tori has zombie make-up permanently applied to her, so she has to act in a play with it on). There’s also the incredibly deranged episode “Rex Dies” where Robbie’s dummy bites the big one – and we’re treated to a death bed scene of his dummy Rex.

It’s all in good fun, and the series has a solid soundtrack with the DVD featuring two music videos from the show “Freak the Freak Out” and “Beggin’ On Your Knees.”

The other special features are “Meet Tori Vega” and “Meet the Cast” which are exactly what you would expect.

Again, VICTORIOUS took more time to find itself then maybe one of these sitcoms should, but by the time the crossover with iCARLY hit last season (“iParty with Victorious” which is featured on iCARLY: THE COMPLETE 3RD SEASON DVD set), the show fully understood its identity and what to do with its characters.

Schneider is making a name for himself in the sitcom world for the Tween market, but the secret ingredient is he’s making shows that the whole family can enjoy. It would be interesting to see what would happen if he could extend his brand into the network world, because certainly it could use a jolt of his offbeat sensibilities to shake up primetime. Then again, he has a cushy cable deal where he’s left alone to his own devices, and where a show like VICTORIOUS can be given time to grow and find itself without the threat of cancellation – and that alone is a gift most creators would kill for.

Exclusive Interview: Amber Benson on HOW TO BE DEATH novel - Part 1
TCA 2012: NBC talks about SMASH Season 2 and why changes were made
DANCING WITH THE STARS Recap – Season 16 – Week Six - Stevie Wonder We...
THE VIETNAM WAR: Filmmaker Ken Burns - Exclusive Interview - Part 1