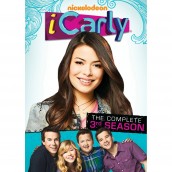 I hate to admit it, but Nickelodeon’s iCARLY has proven to be one of the best sitcoms around. It’s traditional in its structure, and yes it’s geared toward Tweens, but it’s above and beyond many sitcoms on Network TV and it puts most of Disney’s Tween-coms to shame.

iCARLY is centered around teenager Carly Shay (Miranda Cosgrove) who is the host of a popular Internet show with her best friend Sam (Jennette McCurdy) and her cameraman friend Freddy (Nathan Kress). The cast is rounded out by her goofy brother Spencer (Jerry Trainor) who raises her (their father is in the military, and therefore not around) and their friend Gibby (Noah Munck) who has a tendency to take off his shirt during in opportune moments.

The third season certainly gets way out there dealing with children sweatshops in “iSell Penny Tees” and family therapy in “iSam’s Mom” (featuring Jane Lynch as Sam’s mom). And many episodes have funny elements to them and others are just strange for no reason. Season 3 also has a tendency to just end their episodes without even resolving their main stories. It’s a weird tactic that some times works and other times prove to be frustrating.

There are also two hour-long episodes. “iStart a Fan War” takes place at a web convention where the fans fight over whether Freddy should be with Carly or Sam. Jack Black makes a pretty funny guest appearance and gets in a major duel with Spencer.

The hour-long finale  “iParty with Victorious” combines two Dan Schneider created shows into one – where Carly and her friends travel to Los Angeles to deal with a  two-timing boyfriend who is dating Tori (Victoria Justice) from VICTORIOUS.

This episode was a smart move since it introduced younger Tweens to the slightly older skewing Victorious. It also features some pretty disturbing “disguise” make-up for our three iCARLY leads.

“iOMG” is really the true season finale, since it finally settles the love/hate relationship between Freddy and Sam. It seems Sam has feelings for Freddy, they kiss and the pay-off is not resolved until the beginning of Season 4.

The special features are standard – a featurette looking at Sam’s mom, Carly’s new room, etc. However, with the craziness the show offers, having a blooper reel or something a little more substantial might be more satisfying to fans.

Still, iCARLY has found a way to grow up with its teen stars and it’s still impressive in the way that it makes the storylines and the humor perfect for the Tweens, yet also acceptable and quite entertaining for more discerning parents. As the actors get older, the show may soon be wearing out its welcome, but for now, as the COMPLETE 3RD SEASON proves, iCARLY is still one of the best live-action series Nickelodeon (or Disney Channel for that matter) has to offer.