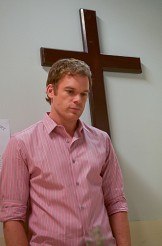 In DEXTER, it’s rare for the title character (Michael C. Hall) to be brought up totally short, but that’s what happens in a scene in “Sins of Omission,” which provides an unexpected grace note. Dexter is searching for the whereabouts of crazy yet learned Professor Gellar (Edward James Olmos) and tracks down a possible former colleague (W. Morgan Sheppard) of Geller’s at a rest home. The old retired priest suffers from dementia, so that he mistakes Dexter for a parishioner. The priest thinks Dexter is there to give confession, and offers Dexter absolution for his sins. Dexter is astounded. “You can do that?” The priest assures Dexter that God will forgive any sins he can confess. Dexter hesitantly confesses to multiple murders. The priest is troubled – this is a mortal sin. Before the priest can explain mortal sin, however, he is stricken by a wave of confusion and remembers only that he is in the midst of receiving confession and therefore gives Dexter absolution.

The scene doesn’t totally absolve DEXTER of its erratic nature this season, but it’s good enough in context to make Dexter’s arc this year seem more worthwhile. It’s unlikely Dexter is ever going to believe in organized (or even disorganized) religion, but it’s an intriguing way for him to continue to grapple with the notion of external forgiveness, which he’s been dealing with in various forms through Brother Sam (Mos), Jonah Mitchell (Brando Eaton) and now Gellar’s erstwhile assistant Travis Marshall (Colin Hanks), who has disowned the professor and all his works.

With Miami Metro in a frenzy partially due to public panic over the Doomsday Killer, or “DDK,” Dexter tries to privately resolve the situation by approaching Travis and asking for help finding Gellar. Travis refuses, citing fear for the life of his sister Lisa (Molly Parker). Meanwhile, Dexter’s police lieutenant sister Deborah (Jennifer Carpenter) realizes that Gellar has an associate and has her squad searching through all of Gellar’s previous male students. Deb herself takes to the field and interviews Lisa, who knows nothing.

However, Gellar sees Deb leaving the house and draws his own conclusions. Gellar knocks out Travis. In the morning, the police find Lisa dead in Gellar’s Whore of Babylon tableau. Deb blames herself, Dexter (inwardly) blames himself and Gellar of course blames Travis, who is now captive in the basement of Gellar’s church. Dexter’s visit to the old priest provides the location of the abandoned church, where Dexter finds Travis chained up, furious and heartbroken that Gellar killed Lisa. Travis vows to help Dexter kill Gellar.

Unfortunately, everything Dexter is doing makes Deb think that he is blowing her off and excluding her. Louis (Josh Cooke), Masuka’s (C.S. Lee) new lab assistant who hero-worships Dexter for his forensic skills, dates Batista’s (David Zayas) sister Jamie (Aimee Garcia), much to Batista’s disapproval. Louis also winds up helping Dexter in his research, though of course Louis has no clue what it is that Dexter is researching. Then there is the weird behavior of Captain LaGuerta (Lauren Velez), who is determined to prevent Deb from investigating the overdose death of a prostitute at a high-end hotel. (We can guess that LaGuerta is protecting the prostitute’s final client.

This is all pretty lively stuff. Louis’ “puppy dog” (Dexter’s words) adoration is amusing without being over the top and whatever is going on with LaGuerta is promising. It’s unclear why Batista is quite so down on Louis (it’s not like Jamie is dating Masuka), but there’s time to flesh this out. Carpenter brings visceral pain to Deb’s feelings about being shut out by Dexter, just as Hall is affecting in his unhappy, helpless bewilderment in the face of Deb’s hurt.

Mostly, though, it’s good to see Dexter handling some issues that are new to him as the main story arc accelerates. Having Gellar stalk Dexter while Dexter is stalking Gellar may be a good game – certainly Dexter’s never tangled with anyone who has such a literal God complex before. May the best man – in this case, that’s clearly Dexter – win and may the battle that precedes it be one worthy of this series.