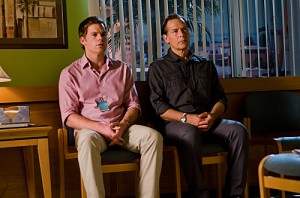 Thanks to a mixture of facts and mythology, including a Bruce Springsteen album using the state as a title, Nebraska has become famed for its bleakness and its production of serial killers. It therefore makes sense that DEXTER the show and Dexter (Michael C. Hall) the character would pay the place a visit eventually, which is what happens in the episode “Nebraska.”

It’s not a random road trip – Deborah (Jennifer Carpenter) calls Dexter into her office to tell him that the wife and daughter of Trinity Killer Arthur Mitchell (John Lithgow), the man who murdered Dexter’s wife Rita, have been butchered, apparently by Trinity. The family was supposedly safe in their relocated home in Nebraska, but Trinity seems to have tracked them down somehow. As Dexter is the only one who knows Trinity is dead – because Dexter killed him – everyone else buys the story of Trinity’s son Jonah (Brando Eaton). Jonah claims he saw his father in the house and fought with him after Trinity pushed Jonah’s mother down the stairs. Dexter knows Jonah is lying.

The shade of Dexter’s dead brother, Ice Truck Killer Brian, aka Rudy (Christian Camargo), urges Dexter onward. So Dexter and Brian take a road trip, right when Deb needs Dexter’s expertise to try to find out exactly what sort of blood the Doomsday Killer’s freed victim was forced to ingest. Brian keeps urging Dexter to kill everyone in sight, pointing out that Dexter really likes to wake up his victims on the slab so he can see the light go out of their eyes. Dexter maintains self-control until a motel clerk tries to rob him of his knife set, threatening him at gunpoint.

Dexter’s vision of Brian is so realistic that at first Dexter thinks Brian, rather than Dexter himself, is the one who stabs the clerk with a pitchfork. Dexter then interrogates Jonah who, to Dexter’s surprise, begs Dexter to kill him. Despite Brian’s interruptions to Dexter, the true story comes out. Jonah’s mother kept waiting for her husband to come back, despite his crimes and his horrible treatment of his own family; she blamed her children for Arthur’s disappearance.

Jonah’s sister Rebecca couldn’t cope any more and committed suicide in the bathtub. Jonah found her body, lost control, beat his mother to death and now wants to die himself. Dexter sees that Jonah has a conscience and remorse. Jonah is not Dexter-victim material. Despite Brian’s incessant provocation, Dexter declares that he does not want to see the light die in Jonah’s eyes. Dexter advises Jonah to forgive himself, then runs over Brian’s shade as he leaves. On the way back into Miami, Dexter picks up a hitchhiker – the shade of Dexter’s adoptive father Harry (James Remar), who says, “Welcome back, son.”

In other news, Captain LaGuerta (Lauren Velez) humiliates and stresses Deborah over Deborah’s solve rates, albeit they reflect on LaGuerta as well. Deborah and ex-boyfriend Quinn (Desmond Harrington) finally apologize to one another over the circumstances of their breakup and make up as friends, though Deborah feels they cannot be a couple again. It’s a lovely sequence that even finds room for some humor (when Quinn compares getting married to other things that couples eventually do, like buying a coffee table, Deborah points out, “We talked about a coffee table!”).

Seldom has an audience been so glad to see a figment of a serial killer’s imagination as when Harry returns. Both symbolically and in our immediate experience of the scene, Harry is comforting proof that Dexter has returned to normal (well, as normal as Dexter ever gets). We comprehend what Brian’s story function is, but is Dexter’s inner total darkness, the one with no moral code, not only wildly lethal but also a jerk? It feels like there should be something dangerously alluring about Brian to make Dexter tempted to bond with him. Dexter is tempted, all right, but we don’t feel it. We’re ready to run Brian over way before Dexter is, not because Brian is a homicidal fiend, but because he’s such an egomaniacal babbler that he’s no fun to be around.

Running through all of this is Dexter’s fear that he may pass on his own serial killer proclivities to son Harrison. We understand Dexter’s need to find out whether Jonah carries Arthur’s darkness and Dexter’s enormous relief when the facts prove otherwise. It is an affecting throughline and Hall as usual plays it beautifully.

As far as setting up where Dexter’s boundaries like, “Nebraska” does a pretty good job. However, there’s a nagging sense that Dexter giving in to his darkest urges should have been a prospect that we should see as a more attractive and frightening prospect than the notion of him giving in to his inner complainer.