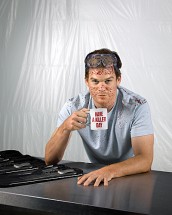 Maybe the idea all along is to have Dexter (Michael C. Hall) simply going through his own journey of faith parallel to the depredations of religious fanatic Professor Gellar (Edward James Olmos) without actually intersecting with it on DEXTER. On the other hand, maybe the writers came to the conclusion after they got underway this year that there was no way of successfully integrating Dexter with the season arc murder plot and therefore are going all out on Dexter’s arc separate from the serial killings. Either way, “Just Let Go” gives Dexter a satisfyingly huge moral dilemma – one that would tax a far less violent soul – and concludes with a real shocker.

Dexter’s friend Brother Sam (Mos) is clinging to life in the hospital after being shot. Dexter and the department believe the shooting was done by the new leader of the gang angry at Sam for reforming their homeboy Nick (Germaine De Leon), but the suspect is killed in a gunfight before Dexter can do anything. Then, shades of Sherlock Holmes, Dexter goes over surveillance footage of the shooting (the perp’s face can’t be seen) and deduces through the failure of Sam’s dog to bark that the shooter has to be Nick. Nick, not knowing of Dexter’s conclusion, summons Dexter to Sam’s bedside. Sam is dying. Dexter promises Sam he’ll punish Nick, but this isn’t what Sam wants. Instead, Sam wants Dexter to tell Nick that Sam forgives him. More, Sam wants Dexter to forgive Nick. Sam insists there is light in Dexter.

Dexter grapples hugely with this. He takes Nick out to the beach where Brother Sam baptized his killer. Dexter tells Nick that Sam forgives him – Dexter just wants to know why Nick did it. Nick finally says that Sam lied to him; being baptized didn’t make things any better. His old gang never lied to him, so Nick went back, but he had to prove himself by killing Sam. Dexter is still trying to forgive Nick, but when Nick realizes there’s no proof and he can’t be arrested, he makes the mistake of gloating in Dexter’s face. Dexter loses it completely and drowns Nick in the waters where the baptism took place. As Dexter wades back to shore, he hears applause from a lone set of hands. It’s not a live witness – and it’s not Dexter’s usual hallucination of his father Harry (James Remar). Instead, it’s Ice Truck Killer Rudy (Christian Camargo), who Dexter killed in Season 1.

Meanwhile, even if he weren’t orchestrating a lot of grotesque deaths, Gellar would be a hateful pain in the ass because of his pushy certainty that he knows God’s will. (There may be a surprise in store on this front, but for now, he’s not only a psychopath, but also a major jerk.) Disciple Travis (Colin Hanks) has finally had enough, and rather than brand their latest victim, Travis drives the poor woman out to the beach and lets her go.

Deb (Jennifer Carpenter) sees a therapist as part of her department-mandated post-shooting protocol. She astonishes herself by actually confiding in the therapist about how she feels that being a lieutenant has cut her off from her friends in the detective squad. The therapist advises Deb to just be herself, and Deb throws herself a housewarming party. She also orders Batista (David Zayas) and Quinn (Desmond Harrington) to bring in Gellar’s old associate/girlfriend Professor Morris (Mariana Klaveno) for further questioning, unaware that Quinn had a one-night stand with the material witness. Quinn is unraveling – he shows up drunk at Deb’s party with a bar pick-up, who promptly ditches him when she realizes Quinn has brought her to his ex’s party. Then Quinn hits on Batista’s younger sister Jamie (Aimee Garcia), causing Batista to deck his partner. When it comes up in questioning that Quinn had sex with Morris, Deb is furious, but refrains from firing her unprofessional underling.

Hall gives an even greater performance than usual. He never overplays anything, but we can see Dexter’s confusion, reluctance, faint hope and intense anguish all colliding in everything Hall does here. The writing and direction put us right there with Dexter – we yearn for his redemption at the same time we completely understand his urge to obliterate the hateful Nick. Credit also goes to episode writer Jace Richdale and director John Dahl, along with actor De Leon, for making it clear that Dexter is prepared to go against his killer instincts. Too often, both feature films and television series give us a convenient blur in situations like this, simply making the antagonist so heinous from the outset that the protagonist is obviously right in destroying him, no introspection needed. Here, we see Dexter open to comprehending Nick’s motives – Dexter understands all about feeling disillusioned by a father figure’s teachings – but unable to resist provocation. It’s powerful stuff, beautifully rendered.

Deb is a terrific character and Carpenter plays her splendidly, so that it’s always fun to watch her, especially when her anger at Quinn causes her to construct a sentence held together by her favorite expletive. The squad drama overall is starting to feel like a police procedural that doesn’t quite connect to the darker elements of DEXTER, but it’s entertaining all the same – think of it as MIAMI METRO BLUE.

We welcome the squad’s new understanding that Gellar is actually trying to bring about the Apocalypse, so that the audience and the characters now feel equally up to speed. Like Deb and the gang, we don’t know how Gellar is planning to trigger Armageddon, but it gives them a path to explore.

Meanwhile, with Dexter now being haunted by the vicious Rudy, we are tantalized and terrified by the possibilities of where the character may go from here. In any event, “Just Let Go” is the best episode of this season so far.