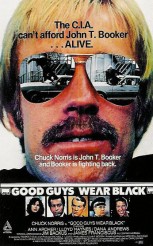 While many people are excited by the new product on display at 2011’s American Film Market, sometimes it’s classic titles making a comeback that gain considerable buzz.

Case in point Gorilla Pictures which recently made a deal to get three classic Chuck Norris films back into distribution after languishing in the vaults for many years.

GOOD GUYS WEAR BLACK, THE OCTAGON and A FORCE OF ONE are the early 1980s classics that put Norris on the map, and Gorilla has made a five-picture Action Pack (including FORCE: FIVE and ACAPULCO GOLD – two additional films not starring Norris) that they’ve been promoting at the market.

And the great part – these films will soon be seen in remastered high-def versions for the very first time.

“Paramount had these films for years,” says Bill Gottlieb, President of Gorilla Pictures. “They had TV rights and the cable rights, but those rights hadn’t been touched in quite a long time. Eric Carson who was the director of THE OCTAGON came to me and showed the films to me and I felt really strongly that if these films could be seen in High-Definition that it would be awesome.”

Now Gorilla has high-def masters for these films and it’s perfect for THE OCTAGON which is celebrating its 30th Anniversary this year. And surprisingly, the Paramount vaults kept the films in pretty decent condition.

“Chuck Norris is back and looking like you’ve never seen it,” says Gottlieb. “A lot of these movies, surprisingly, had been archived quite well by Paramount, so in going through the material, we found all this film stuff, so a lot of remasters came from from the actual inter-negatives. Many of the assets outside of the international language dubs, they wound up being available through Paramount.”

And OCTAGON helmer Carson was quite thrilled with the high-def footage he’s already seen of the film.

“One of the best moments I had during entire process was when Eric Carson came into the office and we showed him the remastered trailer for THE OCTAGON,” recalls Gottlieb. “When he saw the trailer played back you could see what was in the shot and he just said ‘wow, I haven’t seen it look this way since I saw it in theater 30 years ago.’”

As far as interest, Gottlieb says people have been really hot for these titles for both TV and Blu-ray releases, though he says GOOD GUYS WEAR BLACK is the only title that still has some various rights holding it up in some territories around the globe.

“That one is only picture among the group that in much of the world right now, there is a hold back on,” says Gottlieb. “But it will follow in a little bit.”

Gottlieb also thought it would be perfect to pair the three Norris films with two non-Norris starring films FORCE: FIVE and ACAPULCO GOLD to make a five-picture action pack.

“FORCE: FIVE is an ensemble film of martial arts heroes and had the stunt team behind ENTER THE DRAGON for this one,” adds Gottlieb.

In terms of a U.S. release for these films, Gottlieb says they’re currently talking to several companies, but are deciding whether to release them individually or as part of a set.

“We have a number of companies vying for the titles,” says Gottlieb. “One way, it could go out through a company that has both cable, television, Blu-ray and VOD outlets. The other angle is a little more ala carte and maybe even direct sales to the martial arts communities.”

Gorilla also had one of the more clever marketing hooks for selling a film this market as well with a big campaign that proclaimed: “Chuck Norris takes you hostage until you buy his movies.”

“It was definitely fun experience and a busy week going through this market,” says Gottlieb. “And it’s also gotten a lot of interest getting these fun movies from Chuck Norris back out there.”

Article Source: Assignment X
Article: AFM 2011: The scoop on the re-release of the Chuck Norris 1980s classics THE OCTAGON, GOOD GUYS WEAR BLACK and A FORCE OF ONE