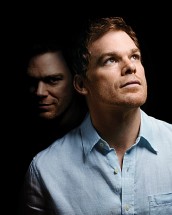 An episode strong in both its arc and standalone aspects

In the teen years, when other kids were worshipping athletes and rock stars, Dexter idolized – who else? – serial killers. In the DEXTER episode “Smokey and the Bandit,” we learn that one of Dexter’s persons of interest was the Tooth Fairy, a never-caught prolific murderer whose signature was stealing a tooth from each of his female victims.

When a young woman’s body is found with part of her tooth broken off, Dexter wonders if the Tooth Fairy has resumed his activities in the Miami area. Dexter does his usual detection and narrows his search down to Walter Kenney (Ronny Cox), an extremely grouchy senior citizen living in a retirement community. Dexter befriends Walter as much as he can – it’s hard to have a cordial relationship with a curmudgeon like Walter – and winds up listening to a litany of complaints about old age and how Walter’s son totally ignores him. Dexter wonders if he’s got the right guy, but then discovers a box full of individual teeth, much like Dexter’s own box of blood slides, in Walter’s storage unit.

When Walter calls Dexter, saying he’s become lost and got off at the wrong bus stop, Dexter picks him up and actually starts to feel sorry for him – until Walter pulls a gun on Dexter. Walter has “Goggled” Dexter and knows he’s with Miami Metro Homicide. Walter assumes this is why Dexter has tracked him down. Dexter manages to turn the tables on Walter – he’s prepared the kill room in Walter’s retirement home apartment.

Walter says he wants it known he’s the Tooth Fairy – this will finally make his son pay attention. Dexter is so horrified by the idea that his little son Harrison may someday know about Dexter’s serial killing that Dexter actually departs from ritual with Walter. Instead of stabbing him, he uses a pillow to suffocate Walter, making it appear that the elderly man simply died in his sleep. At home, as Dexter prepares to put Walter’s blood slide away, Dexter fumbles with the box and the slides hit the floor, going everywhere. Now Dexter has no idea which slide belongs to which victim. He is deeply shaken.

In other developments, Quinn (Desmond Harrington) is furious with Deb (Jennifer Carpenter) for not marrying him, as he wrongly assumes this is connected to her promotion to lieutenant. Batista (David Zayas) genuinely has Deb’s back and warns her against being bullied by now-Captain LaGuerta (Lauren Velez). LaGuerta assumes that Deb will accept LaGuerta’s choice for a new homicide detective (to replace Deb in the field); Deb bucks LaGuerta and picks an outsider from Chicago.

Meanwhile, the religious serial killers (Edward James Olmos and Colin Hanks) have a new victim. After forcing him to repent his sins by terrorizing and torturing him, the victim is killed. The corpse is set on the back of one of four horses and sent out into the streets of Miami as a representation of the Four Horsemen of the Apocalypse.

What makes “Smokey and the Bandit” such a good episode is that Manny Coto’s script finds a new way of challenging Dexter’s view of his own identity. Until now, the box of slides has been so sacrosanct that neither Dexter nor the audience has ever questioned it. With the slides out of order, the box loses its meaning. What does this say about the killings Dexter has committed? Do they now also have a different meaning, and if so, what does this say about Dexter? He’s left grappling with all this as the episode ends and watching him come to some conclusions, whatever they are, should be fascinating.

Further, Dexter’s interactions with Walter force Dexter to think about what may happen if he outlives the ability to act on his urges, and how he’d feel if Harrison learned about Dexter’s secret activities. This not only provides plenty of new legitimate issues, but it’s fun getting there, with Cox relishing Walter’s loudly misanthropic nature and playing beautifully off Hall’s determined calm.

The police department scenes give us a strong rooting interest. It’s great to see Deb and Batista having each other’s backs again. While it was good to see added dimension to LaGuerta, it seems like a relief to us and to the writers to let her dominant political animal side return to the fore.

There’s also an interesting little riff with Brother Sam (Mos) gently trying to get Dexter to come to a barbeque/religious meeting on Sunday. Dexter is both attracted and repelled not only by the notion of spirituality, but of hanging out with what seems to be a genuinely reformed killer. This has definite possibilities, and Mos holds the screen with authority.

So far, our season arc serial killers seem too nutty to be especially interesting as characters, but between the snakes in the body and the Horsemen of the Apocalypse, they have a wonderful sense of spectacle.

We are left wanting to see where all of this will go, which of course is the point.