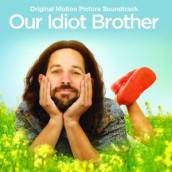 A cute soundtrack to get your Zen toke on with

A pleasant LITTLE MISS SUNSHINE vibe fills the soundtrack of a movie that’s far more human comedy than the stoner one its ads would lead you to believe. IDIOT’s band of loveable losers gets a similarly ironic, if more low-key vibe on their path to self-actualization, especially with this pleasantly eclectic soundtrack.

BROTHER certainly starts on the right foot with Eric D. Johnson’s whimsical interpretation of the Tony Orlando and Dawn hit “Tie A Yellow Ribbon Round the Ole Oak Tree,” with plenty of pointed strumming to follow with Johnson’s “2 Roadrunners” and “The Fruit Bat’s “Lightning Bug.” But is there’s a down-home singer that conjures a man-boy lost in a countrified haze, then it would be Willie Nelson. Here he becomes the voice of the titular, blissed-out relative with “Wonderful Future,” “Midnight Rider” and “Ol’ Blue.” They’re ballads of sad fate, an outlaw on the lam and a dog’s eternal devotion that come off as far funnier than likely intended.

Nelson’s Zen also infiltrates the score by Nathan Larson and Eric D. John, whose perky whistling, bluesy Mellotron and rock and roll taxi ride, complement the haplessly happy vibe of a slacker optimist who’s better left in the foliage of upstate New York than in the city with his screwed-up family. All make for gentle musical life lessons to be learned by the sweet soundtrack of OUR IDIOT BROTHER, an album worth a toke and a smile.

Click on link: To buy the OUR IDIOT BROTHER soundtrack