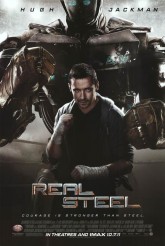 A well crafted movie with heart, robots, and enough boxing to satisfy a ROCKY fan!

I will freely admit that I expected little or nothing from REAL STEEL. I kind of looked at like a film version of “Rock ‘Em Sock ‘Em Robots” with Wolverine. I was pleasantly surprised at a film that has depth, nicely crafted story, and a lot of very touching scenes. Plus, there’s enough boxing and robots to make a ROCKY fan happy.

The basic plot of REAL STEEL is more than a little reminiscent of a lot of boxing movies, you have a down on his luck boxer who used to be something of a champ in the ring. Then you add into the mix an eleven year old son that he suddenly has custodial rights over, and of course the kid has an aunt that is wealthy and wants to adopt him, so boxer dad gives up the kid for money but spends one summer with him since the aunt is off to Italy.

Charlie Kenton (Hugh Jackman) is our down on his luck former boxer who has been struggling to find his way in the world every since boxing became a robot and not a human sport. He works backwoods fairs and owes money to everybody and their dog, including his old trainer’s daughter Bailey (Evangeline Lilly). Into Charlie’s world comes his son Max (Dakota Goyo) who Charlie only sees as an opportunity to make some more money by selling the kid to relatives that want him. They spend one summer together during which Max finds an old robot named ATOM and the three of them embark on a journey about life, family, and how to make it big in the world by just working and believing in each other.

It might sound like this is a ridiculous movie. People probably said the same thing about ROCKY when that movie came out. REAL STEEL has the exact same feel as ROCKY or THE CHAMP, in that you are rooting not only Charlie and Max to find a father and son relationship, you also want them and ATOM to make it all the way to the top of the Robot Boxing League. This is a movie about rooting for the underdog, and believe me it takes some time for the underdog to get likeable enough to root for.

Jackman and Lily are both great in this film. Managing to give real emotions and to make even the most ridiculously Science Fiction scenes realistic. But, it’s Dakota Goyo as Max who completely steals this movie. Goyo is genuine, sweet, touching, and a real acting talent. It is completely impossible not to fall in love with Max and feel protective of him. There is a shared moment towards the end of the film between the three actors that will have even the hardest hearted person reaching for a hanky.

The robots both practical on set and digitally created are perfect and they only add to the storytelling and don’t pull focus. I think that’s the most important thing about these ‘bots. This movie is about the people who are trying to scratch out a living by battling these giants in the boxing ring, and the movie doesn’t make the mistake of focusing on the robots too much.

This is a just a feel good family movie that took me by surprise and if you give it a chance you might be taken as completely in by it as I was!

Click on Link: Exclusive Photos from the REAL STEEL premiere