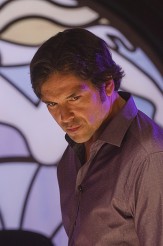 Multiple storylines heat up in this clever episode 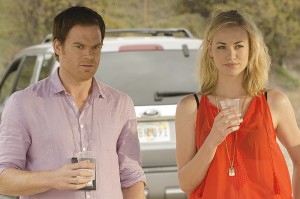 There are circles upon circles within the DEXTER episode “Swim Deep,” as Dexter (Michael C. Hall) and visiting Ukrainian mobster Isaak Sirko (Ray Stevenson) try to suss each other out, or kill each other, or both. Meanwhile, Deb (Jennifer Carpenter) is scrambling to protect Dexter from Captain LaGuerta (Lauren Velez), who is trying to surreptitiously uncover the true identity of the Bay Harbor Butcher. We know, and now Deb knows, that this is really Dexter, but all LaGuerta knows that it is not the late Sergeant Doakes, who had been successfully framed (but not killed) by Dexter back in Season 2. Finally, there’s Dexter’s realization that innocent-seeming Hanna (Yvonne Strahovski), believed to have been a reluctant underage companion to a serial killer fifteen years earlier, is a killer herself.

Seeing unexpected bloodstains on his boat, Dexter sprays Luminol and sees so much residue that he realizes someone was killed there – and that he wasn’t the killer. DNA proves it was Dexter’s jerk of a nemesis, erstwhile lab tech Louis, who was in fact killed by Ukranian mobser Isaak.

Seeing Dexter and Isaak playing a kind of criminal leap-frog with each other is very entertaining, as there’s the whole issue of who’s stalking whom. When Dexter and Isaak finally have a conversation, Isaak explains that he blames Dexter and the whole Miami Metro PD for the death of Isaak’s friend Viktor, killed by Dexter after Viktor had killed both a stripper and Miami Metro detective Mike Anderson. Since Deb now knows what really happened to Anderson, she has to lie to her former partner Batista (David Zayas), who doesn’t believe the department’s current theory that Anderson was killed by a bartender who committed suicide.

Dexter realizes Deb is in danger as well, and convinces her to spend one night in a motel with him where Isaak can’t find them. Dex and Deb have something like a heart to heart, recalling a childhood outing at the beach (which gives “Swim Deep” its title). They reach a kind of détente, with Dexter tentatively agreeing not to kill anyone Deb can arrest.

However, Deb is only willing to spend one night in the motel and Isaak can’t be arrested. Dexter, knowing the Ukrainian and Colombian mobs are at war, lures Isaak into a Colombian mob bar hangout. Dexter is startled to later learn that Isaak killed everybody in the bar (Dexter had assumed the Colombians would kill the Ukranian), but with fingerprints and DNA, there is now plenty of cause to arrest Isaak.

Meanwhile, Deb manages to get rid of some incriminating photos that LaGuerta’s investigation turns up, without LaGuerta ever seeing them. Dexter finds evidence that Hanna personally stabbed a woman to death fifteen years ago, but Hanna has made a deal with the D.A., gaining immunity for leading them to bodies of missing victims. Dexter wonders if perhaps Hanna is still killing.

The evolution of the emotional and practical situation between serial killer Dexter and his police lieutenant sister Deb continues to fascinate, with both Hall and Carpenter giving riveting performances. Carpenter is fearless, letting Deb be all-out, a raw nerve desperate for some certainty she fears she’ll never find. Hall as Dexter is mercurial, gentle and listening, yet with fearsome boundaries.

Then there is the interaction between Dexter and Isaak, with Dexter realizing his urbane adversary is thoroughly formidable and Isaak with little idea of who and what he’s up against.

It’s hard to know where Hanna is going to fit into all this, but Strahovski performs the tightrope act of being playful yet sinister very well.

Seven seasons in, DEXTER demonstrates that sometimes a long run allows a show to build grippingly upon its history. “Swim Deep” is a good example of this.