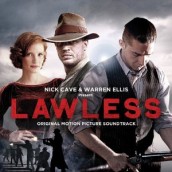 The team of director John Hillcoat and composer-screenwriter Nick Cave have resonated with a raw, innovative energy that’s made such pictures as THE PROPOSITION and THE ROAD anything but the same old outlaw story. The duo’s in-your-face creativity now pays off with triple-proof results for their violently entertaining moonshiner flick LAWLESS.

Sure they could have gone for tunes that would have sounded just like the prohibition period. But it’s a contemporary energy that suffuses this song album. Getting off to a bang with the r & b cover of “Fire and Brimstone” by Mark Lanegan, LAWLESS‘ first impresses with a live-fast-die-young hillbilly energy, personified with the raw chords of Cave’s “Burnin’ Hell.” Yet despite the fiery country rock promised by this furious set-up, “Lawless” mostly becomes a series of poetic folk ballads by Ralph Stanley and Emmylou Harris, one old-timer’s weathered voice casting a strumming sense of destiny, while Emmylou Harris poetically expresses a backdrop of beauty and spilled blood, from the spellbound love of “Cosmonaut,” to the violent bond of three brothers’ “Fire in the Blood.” Lanegan contributes more energetic roadhouse numbers with Captain Beefheart’s “Sure ‘Nuff ‘N Yes I Do” and Lou Reed’s “White Light / White Heat” with Willie Nelson contributing a rocking bonus track for “Midnight Run.”

These vibrant performances that make for a still-full of “Punk meets Nashville” anachronisms, impactfully showing how modern songs about pleasurable excess are just as fitting in a prohibition context. With Nick Cave’s haunting, rustic sound that ranges between a shimmer and a painful, stiletto scratch across a guitar’s throat chords, the only violation of LAWLESS album is it only offers one instrumental track of Cave’s innovative score with Warren Ellis, an innovative score that continues to prove them as two of the most genuinely brilliant outlaws on the film scoring scene.