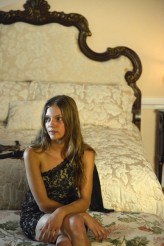 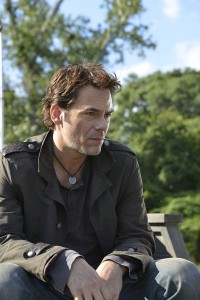 So, how’s that whole “wanting to see the world” thing working out for you Charlie (Tracy Spirdakos)?

There were some decent aspects to REVOLUTION this week but as with most of the episodes so far this season, “Sex and Drugs” also had some pointless and fairly stupid aspects as well.

After the last episode with Nora (Daniella Alonso) getting shanked by her own teammate in the resistance, she teeters on the brink of death. Luckily, Miles (Billy Burke) in all his mysterious and nefarious glory knows someone that can help. Someone that he has past ties with and can save her.

That person is Drexel (guest star Todd Stashwick), a wealthy warlord producing all manner of drugs in his mansion in the middle of nowhere. Drexel was one of Miles’ right hand men during his time with the Militia (in which Miles was a general) and helped the Militia gather enough gold to fund said militia. Drex informs us that Miles used to line up hundreds of people to be shot at the drop of a hat but when he deserted the group, Drexel’s power also waned as he was seen as an accomplice or at least an ally. Needless to say, Drex isn’t too happy with Miles.

He is, however, willing to help Nora if Miles and his crew do him a little favor. Go kill the local Irish neighbor that keeps burning down his stash of heroin – which is obviously still a commodity and source of income after the lights went out.

But Drex doesn’t want Miles to go. He wants Charlie to do the deed since she can slip by the Irish dude’s guards and get close – which leads to one of the stupid moments as after Charlie goes through the motions to get close, Miles ends up showing up there anyway to stop her from doing it. Charlie wanting to be a tough chick during these hard times accepts and would have done the deed had Miles not intervened.

With that we got a host of Charlie-isms this week:

One of the things that I had been wanting to see is how others are living in a world without electricity and seeing this drug lab in the middle of nowhere was also nice but it was the delivery that was the issue with a pretty much non-event happening that lead to pretty much nothing in terms of the long term mythology of the show.

Sure, we got some good flashbacks to what happened with Aaron (Zac Orth) after the lights went out and showing he was indeed wealthy and had a nice wife that loved him for who he was rather than his money. But it also showed that Aaron wasn’t equipped to handle the new world well and instead of fighting for his wife and his own life, fled and left her. Leaving us to wonder if she is still out there (probably part of the militia since everyone seems to be placed in there after they leave us with a tidbit) and if they will at some point meet up once again. Aaron, of course, must fight for his life 15 years after the lights went out when Drex orders a good ole fashioned duel between Nola and him. This sets up a nice little bit where Aaron has learned something in the last 15 years and willing to fight now.

Like I said above, this was kind of a mixed bag for me (although Charlie side boob pushing me a little toward liking it), I enjoyed the flashback with Aaron and his turning the tables on Drex but the delivery with Miles and Charlie was pointless as was the bits with the militia and Danny (Graham Rogers) and his mom (Elizabeth Mitchell).