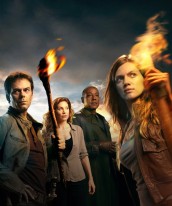 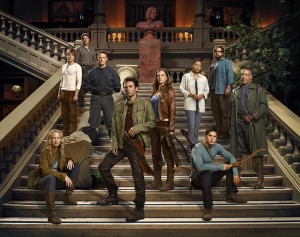 NBC’s new series REVOLUTION premieres tonight, Monday September 17, at 10 PM.  Created by Eric Kripke (SUPERNATURAL), who executive produces REVOLUTION with a team headed up by J.J. Abrams, the show opens with a mysterious event suddenly stops all electrical power around the planet. Fifteen years later, society has reformed sans electricity. A young woman named Charlie (Tracy Spiridakos) must travel through the landscape with a small group of companions who want to find out exactly what happened – the more so because of a militia that intends to violently prevent them from doing so.

The REVOLUTION pilot was helmed by Jon Favreau, who started as an actor/writer, rising to fame with the cult comedy SWINGERS, and then becoming a major feature film director with credits that include ELF, COWBOYS & ALIENS and the first two IRON MAN movies. At a party thrown by NBC at the Beverly Hilton Hotel for the Television Critics Association, Favreau talks about launching the new drama/adventure show about a low-tech future.

ASSIGNMENT X: How did you hook up with J.J. Abrams and Eric Kripke?

JON FAVREAU: Eric I hooked up through J.J. J.J. I’ve known for many years. I remember I met him on DINNER FOR FIVE [the celebrity interview/meal show Favreau created, hosted and produced for four seasons, 2001-2005], he was a guest on one of the last shows. and we became acquaintances and industry friends. I remember buying him a cup of coffee when I got the gig to direct IRON MAN, because he had just done MISSION: IMPOSSIBLE and we had a talk about visual effects and ILM and the best ways to shoot the elements for comps and technical stuff, and he and I have both followed each other over the years, sometimes when he had a pilot that he was curious about me directing. We’ve been wanting to do this for awhile. I wasn’t available the last time he called, and now I was available and he said Eric was “one of us, you’ve got to meet him.” I met him, read the script, thought it was great and it came together pretty easily.

AX: Besides better ways to do visual effects, have you learned anything else from working with J.J. Abrams?

FAVREAU: I’ve learned a lot from J.J. Just being at his shop, at Bad Robot, to watch how he has his whole company organized, how he’s able to be involved with television and also with movies and doing apps for the iPhone. He’s got a wide range of ages at his company and there’s an excitement and an enthusiasm there. You can see why so many good ideas come out of it. So I learned a lot about how he organizes his world as a producer, keeping in the spirit of Spielberg or Lucas. He’s definitely an heir to that generation. He’s a very positive and enthusiastic guy. I think that’s what’s required. I find that people who get things done fall into a couple of categories. They’re either ruthless or they’re very positive and motivated and excited and enthusiastic, because that’s infectious, and if you just take a step back and look at what we’re able to do and what our job is and the choices we’re able to make and things we’re able to try, it’s a dream come true, and I think he definitely appreciates that, and I think we clicked well because we’re all of us having a ball, doing this.

AX: Is that we he meant by referring to Eric Kripke as, “one of us,” that he also is of that mindset?

FAVREAU: Yeah. I think he is, because he’s somebody who’s a little bit nerdy, a little bit of a fanboy, kind of sharp, but definitely in a story-oriented way, like a big fan who understands the same film references or literary references that we would, and the things that get him excited get us excited. Like swordfights, things like that.

AX: What are your duties on REVOLUTION? Are you involved in the writing of the series at all?

FAVREAU: I’ve been in the writers’ room as they were breaking the whole set of storylines here inL.A., popped by the offices,, looked at cuts, getting dailies on my iPad. Technology makes life easy. And reading drafts of scripts and casting the new important characters. But I have to be honest with you – my notes are really very few and far between. I’m really excited and surprises have happened as they’re translating our story arenas that we had worked on together into actual scripts and episodes. I’m surprised by what they’re discovering along the way. So it’s a very inspired creative environment. And I haven’t been around something like this before. It’s like my first time in the carnival.

AX: You filmed the pilot in Atlanta, and the production for the rest of the series moved to Wilmington, North Carolina. Can you talk about the look of the show and if there were specific inspirations, like maybe the original PLANET OF THE APES and/or LOGAN’S RUN?

FAVREAU: We had been looking at different landmarks from Chicago [where much of the story is set], and [Wrigley Field] jumped out as the one that felt most human, but also seemed to represent society and history. And as we were developing a look for the pilot, we kept looking at photos of Angkor Wat [in Cambodia], and looking at what it looked like when a society used to exist but then nature slowly took it back over, because we didn’t want this to be a dystopic view of the past, especially because it’s told through the lens of two different generations. You have the people who were there before the lights went out fifteen years ago, and then you have the new generation who never knew the old ways. So while people are struggling to hold onto shreds of the old society and struggling to get the lights back on and figure the solution to the mystery, there’s [also] Charlie’s generation, who see this as almost a pastoral, simple place that they grew up. This is the only world they know. And we wanted to show a lot through their eyes, so it didn’t feel like THE ROAD or MAD MAX, but instead felt like this wonderland.

We definitely did discuss LOGAN’S RUN as a point of reference. I haven’t seen LOGAN’S RUN recently, but I remember once they got outside the tech zone, everything was overgrown and there was a sense that, like, a rainforest had reclaimed an ancient society, and the place that everybody was so scared of turned out to be a bit of a paradise. That analogy certainly rang true for what we were looking to present here, which is to turn things on their ear a little bit and go against expectation. Actually, the [title] REVOLUTION is meant to [refer to] aspects of our history from Colonial times, when we were living under oppressive monarchies and then becoming a republic. That was what was exciting for me is, it was a way to tell aspects of our history to a new generation. If you look at all the young adult novels and what’s in the zeitgeist, there’s definitely a sense of the young generation coming and persevering against people who serve as allegories for how they might feel powerless as young people in the world. And you see in a lot of the young adult novels, you’re dealing with other worlds where the young generation is important and being on the front line of a deep struggle, much like when we grew up with STAR WARS. And so it’s an empowering story. PLANET OF THE APES was also a bit of a reference, but [with] PLANET OF THE APES, there’s this sense of darkness and doom to it that we definitely didn’t feel was part of our DNA, although you can’t get away from the visuals of it and it’s seared into all of our consciousness from having grown up with the original film. So I think all of it enters into it. We’re hoping to present a new metaphor that hopefully is exciting for people who have grown up with that, but also a younger generation that sees this fantasy world where you can make a difference. That’s really what it’s about.

And when I first heard that Eric was saying one of his inspirations was LORD OF THE RINGS, I didn’t really understand. But then as I saw the swordfights and the simpler times and the more brutal times in certain ways, it presents itself as a moment where you had to stick together. The good people stuck with the good people. The people who were trying to create society and keep chaos from asserting itself had to struggle and sacrifice a great deal. And that’s the heroic, aspirational quality of this that I think the visuals reinforce, by making it something where you’re entering into another world. I know when I watch TV, I want to be transformed and transported when I sit down and watch, not just by the characters that I grow to love, but also by the world that it plants me into. And so the look and the aesthetic of this is just as much of a character as the people that are saying the words.

AX: We know man made electricity works almost nowhere in the REVOLUTION universe. Does lightning work in this universe?

AX: If something like the REVOLUTION scenario came to pass, what would you miss most in your own life?

FAVREAU: The first thing I would miss? My Japanese toilet. It’s become my favorite piece of technology.

AX: Since the technology wouldn’t be there any more to do film and television, what would you do professionally in that universe?

FAVREAU: I’d be a good storyteller around the fireplace, because there would be no more movies or television, so I would tell stories.

AX: What do you most want people to get out of REVOLUTION?

FAVREAU: I would love it to be escapism. The best type of escapism is something where you enjoy watching it, because it takes your mind off of your day to day problems or struggles, you get to live in another world for an hour, once a week, and it speaks to the better part of human nature, and that there are actually strong themes that have a hopeful message in light of this very dangerous and potentially depressing set of circumstances, for it to be an uplifting story that we’re telling, in a world that you enjoy going back to and don’t feel like you have to escape from. That’s an exciting challenge.