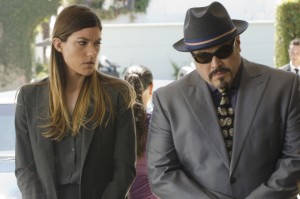 DEXTER doesn’t often resemble a slasher movie, but the plot thread with Louis Speltzer (Matt Gerald) veers into that territory, though in “Run,” we have the satisfaction of knowing the smug sadist has made the absolute worst choice of victim ever: Dexter (Michael C. Hall).

Meanwhile, “Run” also has both Dexter and Deb (Jennifer Carpenter) continuing to ask themselves and each other big questions. Deb, knowing what she now knows, confronts Dexter on Rita’s death in a way that the audience has contemplated but he hasn’t done until now. Deb first wants to know – understandably – if Rita was really killed by Trinity. Dexter assures Deb that this was the case, and though he’s not fully candid, he admits that Trinity found out who Dexter was and came after Dexter’s family. Deb points out that if Dexter hadn’t stuck to his methodology, Rita would still be alive.

Deb now wants Dexter to send young son Harrison to live with – well, this is where it gets weird, though “Run” doesn’t get into it. Rita’s children from her previous marriage, Astor and Cody, are living with the parents of Rita’s deceased first husband (an abusive psycho, though evidently he didn’t get it from his folks). However, these people aren’t related to Dexter and Rita’s son Harrison. Since Harrison’s siblings are living with them, though, and since they adore Harrison, they probably count as grandparents, but … well, not important now, except it’s a little strange Dexter doesn’t bring it up when he insists he’s the only one who can and should raise Harrison.

Then Dexter rethinks his position, at least temporarily. What’s happened: the police arrest Speltzer and, much as Dexter wants to personally kill the guy, he knows this could be a big win for Deb, professionally and psychologically. Deb is even able to provoke Speltzer into confessing. Jubilation doesn’t last long, though, as a judge throws out Speltzer’s arrest. Dexter realizes that Harrison could be a target and sends him to live with the grandparents for the time being.

Dexter stalks Speltzer, but Speltzer gets the drop on Dexter, knocks him out and puts him in a maze. Speltzer dons his bull mask and chases Dexter with an axe. However, Dexter finds a way out, escapes and sandbags Speltzer in the cemetery where Speltzer works. Dexter, at least acknowledging that his own serial killer habits are a problem, doesn’t bind and stab Speltzer, nor does he take a blood slide. Instead, he send Speltzer – alive and screaming – into the flames of the cemetery’s crematorium. Then Dexter throws his cherish box of blood slides into the furnace as well. When Dexter tells Deb what he has done, Deb admits she is glad he killed Speltzer. She still doesn’t know if she can feel about Dexter the way she did before she found out what he is, though Dexter says he still loves Deb as his sister and will always have her back.

Meanwhile, back with the Ukrainian mobsters at the strip club, Isaak (Ray Stevenson) has his techie research Dexter’s identity. Since the cops are hassling the strip club on a daily basis trying to find the killer of detective Mike Anderson, and since Isaak and his crew have deduced that this is Viktor, who was killed by Dexter, Isaak decides to provide the police with a patsy. He and his men force the club’s innocent bartender to write a suicide note and then shoot himself with the gun that killed Anderson. Case closed – though Batista (David Zayas) is suspicious at the neatness of the solution. In a private moment, we find that Isaak and Viktor were at very least close friends and perhaps lovers. In any case, Isaak wants vengeance.

One other issue – Hanna (Yvonne Strahovski), who in her teens was the lover of a now-dead serial killer, stops by Miami Metro, ostensibly to help the police find long-buried bodies. She makes a point of saying hi to Dexter.

Having Dexter run another killer’s obstacle course, with more exasperation than terror, provides a very DEXTER-specific kind of fun. Speltzer is such a thorough-going evil prick (kudos to Gerald, who has no problem presenting us with a gleefully hateful persona) that anyone this side of Gandhi would want him dead. We’re put right in Deb’s position of ambivalence, having to examine our own blood-thirst as we reflexively side with Dexter’s actions here.

The larger issues of overlap between Dexter and Debra, who has non-psychopathic but definite violent traits of her own, are fascinating and get deep, dramatic exploration here. The acting of both Hall and Carpenter is extraordinary in these scenes – he’ll almost certainly get another Emmy nomination for this year, and if there’s justice, so should she.

Stevenson is both formidable and charismatic as the big foe and Strahovski and her character Hanna intrigue as potential trouble on Dexter’s horizon.