Oliver Queen tries to stop the lethal assassin “Deadshot,” who targets a member of his own family. 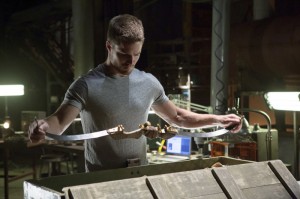 “Lone Gunman” is the most satisfying and successful episode of ARROW to date, and yet it’s the episode that also reveals some of the show’s biggest limitations. Oliver Queen (Stephen Amell) maintains a secret life as a vigilante superhero who pursues villains from a list of the most corrupt, wealthy residents of Starling City.  Once he’s cornered them, his intention is to use his skills with a bow and arrow to force them into confessing their sins.  While Oliver’s back-story as a left-for-dead castaway on a mysterious island, his secret identity as a billionaire playboy, and his struggle to fit into the high society life he no longer feels connected to are all compelling, Oliver’s quest to bring villains to justice has not been thus far.  “Lone Gunman” hopes to turn that around.

The episode begins with Oliver holding another corrupt businessman at arrow-point, trying to compel a confession from said businessman for selling defective fire safety products that resulted in many deaths.  But before that confession arrives, his prey is shot dead by a mysterious assailant who uses a poison tipped bullet.  Not long after, Oliver determines that this sniper is the much-feared assassin known to Interpol as “Deadshot,” a killer so brazen that he tattoos the names of his victims on his body after each completed mission – a canvass that is filling up fast.  (Although he’s curiously left the perfect space open on his forearm for tonight’s victim.   Seems like that prime piece of real estate would have been covered up sooner).

In any event, this is all a pretty good start.   ARROW really needs a strong and threatening antagonist for Oliver, and I began to believe Deadshot could fit that bill.  But it appears the show’s strength isn’t in the building of suspense, nor is it in its action set pieces, (and it doesn’t seem to have the budget for those anyway).  What ARROW does have going for it is an attractive cast, a developing love triangle between Oliver, his estranged ex-girlfriend Laurel Lance (Katie Cassidy), and his best friend Tommy Merlyn (Colin Donnell), (who Oliver learns had been sleeping together while he was lost at sea), and a bunch of family drama between his self-destructive, hard partying sister, Thea Queen (Willa Holland), and his aloof mother, Moira Queen, (Susanna Thompson) who is unable to discipline Thea after years of neglecting her.  The best moments in “Lone Gunman” come from the sparks that fly when Oliver tries to navigate those relationships, and not from his tracking of the assassin.  ARROW wants to spend more time with these stories, and it should.  It’s better at telling them.

The Deadshot storyline turns out to be a dud, as a character we’re lead to believe is a brilliant marksman and criminal mastermind is actually pretty easily dispatched in the finale.  The main outcome of that storyline, however, is to give us the stray poisoned bullet from the climactic fight scene that strikes Oliver’s bodyguard, Dig, (David Ramsey).  Oliver must take Dig back to his secret hideout to administer medical care and an antidote to the poison, thus revealing his secret identity, (although we suspect that Dig, one of the show’s savviest and most interesting characters, knew Oliver’s secret all along).  This holds promise for next week, although I’m not sure Dig in the sidekick role will be as much fun as he’s been as Oliver’s smart, skeptical bodyguard.

My hope going forward is that ARROW finds better footing with its vigilante/superhero story and keeps up the relatively good work it’s been doing with the stories of Oliver’s civilian relationships.  And one of these episodes I’d love to see them include a villain that we’re actually scared of.