Oliver Queen fights back against a crime boss who’s targeted the woman he loves, and we learn more about his experiences as a castaway on the mysterious island. 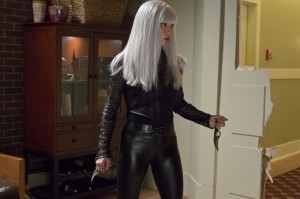 ARROW is a show about a superhero who shoots people with arrows.  I’m not an emergency room physician, but I suspect that’s not a lot different than a superhero who shoots them with a gun or stabs them with a hunting knife.  Since most of the superheroes who dominate today’s movie and TV landscape don’t tend to dispense horrific implied puncture wounds in this manner, ARROW probably needs two things to bring its story in synch with this unique bit of darkness:  1) Embrace the unease caused by a hero who uses edged weapons by going a lot darker in tone than most network TV shows and making his goals more morally ambiguous, or 2) Come up with a super villain antagonist for Oliver Queen (Stephen Amell) who is impervious to arrows, or at least good at dodging arrows, so we’re not thinking about gory impalements quite so much.

“Honor Thy Father” takes a shot at both paths and gets mixed results.  Oliver, the billionaire playboy who’s returned to the crime-infested Starling City after five years of torment on a deserted island while presumed dead, is a man who wants vengeance against the shadowy network of criminals who did business with his late father, and he’s not afraid of killing dozens of henchmen, (but only henchmen, and the seriousness of their fatal-seeming arrow wounds are never actually acknowledged), to do it.  But this isn’t the bloodlust of a Dirty Harry-style vigilante exactly, since his goal isn’t extra-judicial executions of the guilty.  Martin Summers, this week’s crime boss du jour, is merely coerced at arrow-point to confess to the murder of a stevedore that he was already on trial for, and which he obviously committed.  Certain grey areas are avoided to preserve Oliver’s unambiguous hero status, but I’d like to see a lot more grey than we’ve gotten from ARROW to date.

I would also like to see a real antagonist for Oliver, and ideally one with the aforementioned arrow-dodging skills, or something that makes this conflict between Oliver and the underworld seem like a fair fight.  Presently there’s a vague conspiracy, which apparently involves Oliver’s Mom, Moira Queen, (Susanna Thompson), and a cadre of disposable mob bosses, but based on what we’ve seen from the first two episodes, they’re not much of a match for Oliver, given his lethal marksmanship and the way he employs the element of surprise.

“Honor Thy Father” introduces the drug-dealing Triad enforcer China White (Kelly Hu) as a (recurring?) villain, and she has some martial arts skills, but the climactic fight scene between the two is not terribly exciting, and her character isn’t given much that’s interesting to say, and doesn’t give much of a dramatic boost to the proceedings. It’s only during Oliver’s flashbacks to the island where we see truly engaging conflict, because, even though we know Oliver survives his five-year exile, the threat from the elements, the isolation, and the mysterious green-cloaked character who menaces him there, actually seem to be threats.  Back in real time, we’re not very worried for his safety.

ARROW’s other interesting storylines are Oliver’s difficult relationship with his younger sister, Thea (Willa Holland), who struggled in his absence and grew up to become a confused party girl, and his relationship his bodyguard John “Dig” Diggle, (David Ramsey), the world-weary Afghan war vet hired by Oliver’s family to shadow and protect him, very much against Oliver’s will.  Dig seems to be a kindred spirit, and someone who knows that the narcissistic, irresponsible persona Oliver displays for his family and the media is not really who he is, and he seems like the type who will find a way to get past Oliver’s mask eventually.

Overall, there’s a lot to like about ARROW, but I find myself more interested in the reveal of Oliver’s past experiences and resolution of his interpersonal struggles than I am about any future battles he may fight with criminals.  Hopefully future episodes will find a way to make that last aspect of the show more enjoyable.