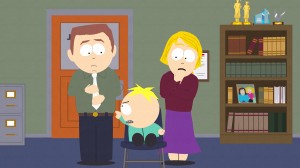 Often times SOUTH PARK tries so hard to be topical and “parody” things all the time, that you begin to expect parodies even when there is none. And sometimes, when they are sending something up – it can get quite obscure and then you feel like a complete idiot for not even getting the point of the episode.

“Go Native” is one of those episode that could go either way. Is it a standalone silly episode, or is it trying to say something about the ABC series LAST RESORT or Ben Affleck and his charmed life. Either way, it’s actually quite clever and fun, though not particularly hilarious (like most of the latter part of Season 16). Yet, it is so different and it focuses on the under-utilized Kenny and Butters that it makes it fun just to see the two of them pair up and go on an adventure.

The hook for the episode is Butters anger finally gets the best of him, and then his parents unload the big bomb – he was born in Hawaii and he must now go through a ceremony in Hawaii to curb his anger.

Kenny tags along, and there becomes a huge war between the “natives” of Hawaii (which are really just tourists that have decided to live there part of the time) and the actual tourists. U.S. military action intervenes. Throw in Butters anger toward Affleck because he hates that he has everything including Jennifer Lopez (only realizing at the end that he’s now married to Jennifer Garner, which changes everything) and you have a pretty solid episode.

This kind of silliness is what SOUTH PARK does best and it includes Kenny’s own journey in becoming a native too – not to mention meeting fat, ghost Elvis (a very funny bit).

Meanwhile, Butters also takes down a cruise ship by a precision hit of a gold ball. One of the best sight gags all season.

Sometime SOUTH PARK just needs to be silly and that’s all it needs and “Going Native” is really simple as it goes for some basic, and quite funny gags I also think one of the reasons why I enjoyed this episode more than “Sarcastaball” and last week’s dreadful “Insecurity” is it wasn’t’t a Cartman-centric episode.

Next week is the first SOUTH PARK Halloween episode in some time – can’t wait to see what they have up their sleeve next.