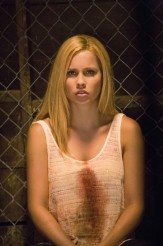 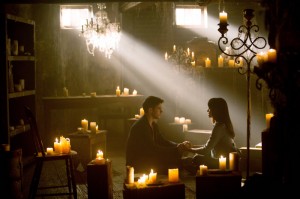 THE VAMPIRE DIARIES is finally back for a fourth season, and the first episode “Growing Pains” is a nice dénouement to the cliff hanger from season three, and also opens all kinds of interesting doors for this new seasons to pursue.

Last we saw Elena (Nina Dobrev) she was opening her eyes on a slab in Mystic Falls’ hospital morgue. So this episode starting with her in her own bedroom takes place immediately the morning after. I like that this show maintains a really nice sense of continuity and doesn’t jump days or weeks ahead just to kick the story in the rear, especially at this point in the characters’ lives. So basically this episode’s big conundrum is will Bonnie (Kat Graham) be able to stop Elena from completing her transition into a creature of the night. Can I spoil it for you? She doesn’t succeed. Which is actually OK with me. At least now everyone can stop worrying about fragile, human Elena, and she’ll become more of a player in any of the machinations of the community and supernatural world than she ever was able to before.

One of the more interesting part of the Elena/Damon (Ian Somerhalder) and Stefan (Paul Wesley) love triangle is now that she is a vampire she has all of her memories back that Damon compelled her not to have. She knows that she met him first, and she knows how much he loves her. She still is with Stefan, but her newfound knowledge just MIGHT change things on down the road this season. I know there’s people in both camps for this love story to work out one way or another, but I have to admit that I like Damon better. He’s not afraid of being a monster to protect the people he loves, and he is just who he is. In many ways to me, he seems more honest than Stefan. He embraces his inner darkness and makes it a part of who he is. Stefan didn’t let his out until Klaus (Joseph Morgan) put the whammy on him.

Speaking of, now Klaus is already out of Tyler (Michael Trevino) and back where he belongs, but not before an almost conjugal encounter with Caroline (Candice Accola) in the woods. Of course, Klaus being Klaus wants the credit for saving Caroline, so he nips that in the bud with his own arrogance, but not before we got our only real strip down of guy flesh in the episode. “Hot Hybrid Sex” sounds good to me. Anyone else out there sad that this train derailed? Anywho, Klaus can no longer make Hybrids since Elena is a vamp, and his dear sister Rebekah (Claire Holt) saw fit to destroy his stockpile of Elena’s human blood as retribution for not saving her from the Council.  Whoopsie! Back to the drawing board Klaus. What are you gonna do now?

So Matt (Zach Roerig) and Jeremy (Steven R. McQueen) are the only humans left in the Scooby Gang, and they both can see ghosts from time to time. It’ll be interesting to see where this series goes now that the Council has declared war on the supernatural and then blown itself up. What did that accomplish? Besides it was only really the death of a new character that has supposedly been in Mystic Falls the whole time (even though we’ve never seen him). “Buffy, make sure you get home before Dawn.” Anyone?