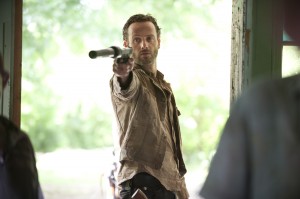 In the premiere episode of THE WALKING DEAD Season 3, “Seed,” Rick (Andrew Lincoln) and the rest of his survival group have been meandering for the winter, going house to house, barely making it and wondering if they’ll ever have a place to call home. A prison looms, offering security and – just perhaps – a start of a new life, whatever that may be. Clearing it out may be a challenge, but is a happy ending waiting in this genuinely haunted house of abandoned cold steel and concrete? You have seen zombie movies before, right? Meanwhile, a sick Andrea (Laurie Holden) and her new friend Michonne (Danai Gurira) are trying to cut their own swath through the zombie apocalypse.

Well, here we are. For anyone that has read the WALKING DEAD comic book series upon which the television show is based, this is it – the moment we’ve been waiting for. Arguably the 100-plus issue comic’s narrative high point to date was the story arc that is now about to reach our television screens over the course of the next season (or two), one involving someone known as the Governor (David Morrissey, not appearing in this premiere). And with the arrival of Michonne last year in stand-in form, and the prison taking center stage as a new home for our survivors, we are about to see if this show can take the comic’s most controversial and celebrated storyline and turn it into television gold. After the excellent upturn in quality and pacing at the end of Season 2, and this stunning opener, all signs point to yes.

Building in a time lapse to account for some hardening of character in our group members is an excellent strategy for the series – and possibly a means of dealing with Carl’s (Chandler Riggs) potential to change more visibly as he grows older during production as well as his transformation into a much more formidable, gun-toting member of the group. Hair also seems to be flowing everywhere; maybe the prison barbershop will help that in an episode or two. After all, that’s just an invitation for zombies to grab hold. 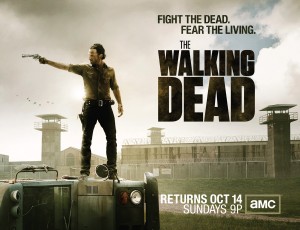 Show runner and writer of this episode, Glen Mazzara, had promised a while back that the ramped-up final episodes of Season 2 were a benchmark for the kind of show we were going to see when it returned, and he wasn’t kidding. Most of this episode does a fantastic job of not only reintroducing us to a more finely-honed and equally more jaded team – with Rick channeling more and more of his inner Shane (I hope that continues) and with a wordless opening that says so much merely with body language and behavior – but reaffirming its genre by providing zombie fans with plenty of action-packed, blood-soaked set pieces. Yes, of all people, I know that the genre is not meant to focus on the carnage above the human drama, and it doesn’t here either. But let’s face it – if you don’t have some gut-wrenching gore, you might as well be a different series. This is a story of survival and the ways the human spirit can persevere in the midst of a zombie apocalypse, and if the zombies are the backdrop for that exploration, then…you need zombies. Lots of them. And they are indeed back with a vengeance, even reappearing via a familiar eye-focused opening from films like RESIDENT EVIL and 28 DAYS LATER but with a cloudy, undead twist.

As for Mazzara, who faced the prospect of proving to fans that he could carry the torch after the departure of series co-creator Frank Darabont, he passed his baptism of fire with some stunning work at the end of Season 2, and this debut only further confirms that he is absolutely the man to take this saga forward. When he actually writes an episode, he captures the characters’ voices perfectly.

Balancing battles with the living dead – including incredible effects and even touches of dark humor as well as one truly creepy theory from Lori (Sarah Wayne Callies) – with introspective moments of song, and even providing a heart-wrenching cliffhanger to propel us into the next episode, this opener not only does what any season premiere should but strongly reassures everyone that this is a series coming into its own just at the time many other shows have found their strongest identity. Three seasons lucky for THE WALKING DEAD? It seems so; now it’s time to await the arrival of the Governor…and a certain errant brother with a missing hand. I can’t wait; so reload and I’ll see you all next week!