Honey Boo Boo, James Cameron and more is skewered in this hilarious episode 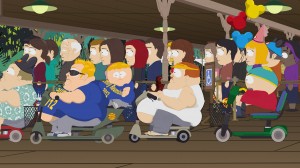 Thank you SOUTH PARK. After an awful return for the second half of Season 16 last week with “Sarcastaball,” the series is back on track with a hilarious and very meta episode called “Raising the Bar.”

The episode concerns itself with society lowering the bar and standards when it comes to overweight people and watching trashy shows like HERE COMES HONEY BOO BOO.

When Cartman accepts he’s fat, he loves that he can now ride around on his own motorized scooter – and take advantage of all the perks that come with it. When Token Black and Kyle decide to do a documentary on him, Token turns it into another standard reality series where you’re laughing at the subject, not with them.

Meanwhile, James Cameron is doing another one of his monumental deep-sea dives to figure out why the bar was lowered.

“Raising the Bar” is a chaotic and very funny episode. When the characters talk about lowering the bar, creators Trey Parker and Matt Stone are even hinting (through their characters) that maybe they were responsible for lowering the bar as well.

The Honey Boo Boo jokes are actually quite funny, especially when she needs to get a heart transplant and they do a transplant, but with a pig heart.

It’s nuts, but dead on. This is SOUTH PARK as we know and love it. And with the nod to James Cameron’s fascination with deep sea diving and doing things most directors would never even attempt makes this episode a new classic in the making. Has the bar been raised after this, probably not, but I love that “Raising the Bar” doesn’t answer that question, it just does what it does best – make fun of the bar itself.