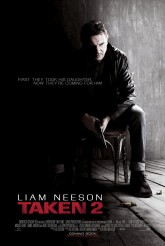 A silly but entertaining action sequel

It’s hard to figure out how to rate TAKEN 2. The sequel to 2008’s TAKEN, TAKEN 2 brings back ex-Black Ops agent Bryan Mills (Liam Neeson), still worrying about his teenaged daughter Kim (Maggie Grace) and her mom/Bryan’s ex Lenore (Famke Janssen). TAKEN 2 on the one hand is even sillier than its predecessor, but it also seems to be exactly the movie its makers set out to put forth. In many respects, it feels like an ultra-big-budget very special episode of a TV show (think NCIS or PERSON OF INTEREST if the main action heroes had families), but there’s a comfort food feel to the familiarity.

As viewers of the original TAKEN know, Kim went on a vacation to Paris and got kidnapped by Albanian sex traffickers, which resulted in her dad Bryan killing what seemed to be a couple zillion people in the course of finding and rescuing his daughter. In TAKEN 2,Bryan notes that Lenore is separated from her husband and she seems in a conciliatory mood. When Bryan gets a brief bodyguard stint in Istanbul, he invites Lenore and Kim to come over and visit him.

This brings us to one of many big “wait a minute” thoughts. We know that Albanian crime boss Murad (Rade Sherbedgia) vows revenge upon Bryan, who killed Murad’s son (among many others) while rescuing Kim.Bryan isn’t privy to the footage we’re watching, but he’s got to logically figure that all of those casualties he amassed last time around may have some survivors who are annoyed with him. Does it really make sense for him to bring his daughter and ex-wife closer to these people?

Not surprisingly (to the audience, at any rate), Murad has his men take a run at the Mills family. Bryan and Lenore are captured, but Kim escapes, thanks to Dad’s advice via his tiny cellphone cube that the bad guys don’t know about. Will Bryan be able to talk Kim through rescuing him? Will Bryan then go back to rescue Lenore and wreak total havoc? Have you ever been to a movie before?

There are moments when viewers will likely laugh out loud (the screening audience did), such as when Bryan instructs Kim how to chart his position and she unhesitatingly knows the parameters. But Neeson is so sincere and the action is so energetic and Istanbul looks so gorgeous that it’s easy to adopt a what-the-heck attitude and enjoy the pop adventure.

TAKEN 2, like its predecessor written by Luc Besson & Robert Mark Kamen, with Olivier Megaton directing this time around (Pierre Morel helmed the first one), tries to make a few serious points, such as that even reprehensible sex traffickers have parents who will miss them if they die. Sherbedgia sells Murad’s grief and resolve as thoroughly as possible under the circumstances, and Janssen shows as much strength as allowed as the largely victimized Lenore. Grace comes closest to being the audience surrogate, doing a good job of conveying incredulity as she’s told to do things that most normal people never experience.

Mostly, TAKEN 2 is a violent but not-too-bloody popcorn movie, unambitious but well-made and moderately entertaining.