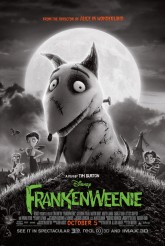 In 1984, Tim Burton made FRANKENWEENIE as a short film (directed by Burton from Lenny Ripps’ script, based on Burton’s original idea) that essentially launched his career. It’s taken the filmmaker almost thirty years, but he’s finally made FRANKENWEENIE into a full-length animated feature film. There’s a lot to love here, but for people who aren’t Burton fans, there are also some narrative lulls and sometimes glibness where heart might accomplish more.

Then again, FRANKENWEENIE induces real tears early on. Elementary school student Victor Frankenstein (voiced by Charlie Tahan) lives in the small town ofNew Holland, where he lives with his loving parents (voiced by Catherine O’Hara and Martin Short) and delights in making backyard eight-millimeter films starring his dog Sparky. When Sparky is hit by a car, Victor mourns and the audience mourns right along with him. We haven’t known Sparky long, but he’s wonderfully conceived as a happy, loyal affectionate canine and anybody who has lost a pet can empathize with Victor’s sadness and loneliness.

Thanks to a school science demonstration on the power of electricity, Victor figures out how to resurrect Sparky. FRANKENWEENIE gets more playful and creative here, finding ways to satirize any number of horror classics from GODZILLA to GREMLINS, but it also loses sight of its initial central concept, the love between a boy and his dog. Sure, this gets occasional lip service, but the action gets so spread out and frenetic that there isn’t time (or even evident enthusiasm) for showing us much of Victor and Sparky. Victor spends a lot of time hiding Sparky, but not much time simply hanging out with him – this isn’t a plot point, just the way things work out as our protagonist rushes around, trying to clean up other people’s follies.

There are a lot of splendid comedic notions in FRANKENWEENIE, starting with our first sight of Victor’s homemade monster movies and carrying through the array of homemade monsters that crop up in the film’s latter portions. A special delight is the character of Mr. Rzykruski, who looks like Vincent Price, speaks in the Eastern European accent adopted by Martin Landau for the occasion, and happily tells a bunch of complacent people what they deserve (if not want) to hear. It’s a lovely tribute to the late Price and a generally memorable figure.

Tahan is sincere and intelligent-sounding as Victor, and Atticus Shaffer scores strongly as Edgar, a creepy schoolmate who at once hero-worships and envies Victor.

The black-and-white 3D photography by Peter Sorg is beautiful and the production design by Rick Heinrichs is thoroughly in keeping with Burton’s ethos – we’re in a color-deprived animated version of the suburbia of EDWARD SCISSORHANDS.

The results are clever and entertaining, but we tend to feel less emotion rather than more as the film goes on. Events feel scattershot, rather than building up tension. We recognize the references to older movies and enjoy the flair and affection with which they’re executed, but we lose sight of the core relationship between Victor and Sparky. We’re still invested by the climax, but not as much as we were earlier on in the story.

FRANKENWEENIE is inventive and fun. Burton fans will likely love it. Others will take pleasure from specific qualities and moments within the production, but not have much feel for the film as a whole.