Another bad episode devoid of any real laughs 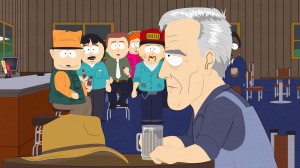 Sadly SOUTH PARK seems to be struggling during the latter half of Season 16. Joining the awful “Sarastaball” is the latest episode “Insecurity” – a painfully unfunny exercise in randomness.

I sense Trey Parker and Matt Stone are trying for some commentary on how fearful the nation has become since the Colorado shootings at THE DARK KNIGHT RISES screening, but it just doesn’t really work.

Things kick off when Ike sees a UPS man having sex with his mom (what he doesn’t know is his dad playing dress up). When Stan ‘s dad overhears Kyle talking about this, he hooks up with other dads who are convinced the UPS man is having sex with their wives too. So they dress up as Bane from THE DARK KNIGHT RISES are start to harass and beat the UPS man up.

Another throughline includes a security firm that you hire to protect you. If there’s a problem, they call you and send the police over with blankets and cocoa. This goes horrible wrong.

It’s all rather scattershot, with a few amusing asides, but it just doesn’t add up to a complete whole. The jokes are absent and it just feels like one of those episodes that started off with noble ambitions and then slowly got away from them as they tried to crank it out in their seven day time crunch.

SOUTH PARK always has its ups and downs and I thought last week’s “Raising the Bar” was brilliant, unfortunately, if you’re going to be a fan of this show, you have to brave the hits with the misses. Let’s pray “Insecurity” and “Sarcastaball” are the rare misses for a much better rest of the season.