With all the topical humor the show could have tackled for its midseason return, this is a major fumble 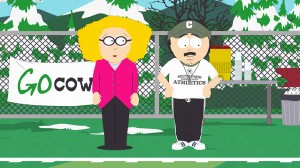 SOUTH PARK is back for the second half of Season 16, but sadly “Sarcastaball” is one of the weakest episodes of the season by far.

Taking on the current topical subject of the NFL and the replacement referees that have been destroying the game, SOUTH PARK touches on things that have been mined to far better effect in other episodes and other seasons.

When Randy finds out South Park Elementary is making school football “too safe”, he gets all sarcastic and starts suggesting other things to make the game safer – like the boys wearing bras, wearing tin foil hats on their heads (because it’s the future) and using a balloon instead of a football.

It’s an absolutely ridiculous laundry list, but the school takes it seriously and “Sarcastaball” is born. Everything Randy does or says becomes a sarcastic diatribe and he agrees to coach the school’s Sarcastaball team. In fact, the NFL adopts the sport too and he becomes the coach for a major league Sarcastaball team as well.

Most of this stuff would have been better off a B story in a much funnier episode, but the gags for this are dragged out. Maybe if you’re into the NFL, you’ll get more of the inside jokes, but I personally found it dull and uninteresting.

The episode does push boundaries a bit when Butters starts talking about the gooey goodness inside of him. Basically, at night, after he dreams of hot ladies, he wakes up with a special fluid under the sheets that he bottles up. It’s his special gooey goodness. It’s what makes him essentially good – and it becomes marketed as a “goodness” booster drink without anyone realizing it’s his semen.

It’s pretty sick, but it’s the funniest and most disgusting part of a rather bland episode.

As is the case with any run of SOUTH PARK, the episodes tend to be hit and miss. However, this being the first show back, you kind of expect more from creators Trey Parker and Matt Stone. I’m confident they’ll get their mojo back quickly, but after waiting all summer for a new SOUTH PARK, it’s kind of sucky to come back and watch them fumble the ball like this (bad pun intended).