The actress also talks about her departure from CRIMINAL MINDS 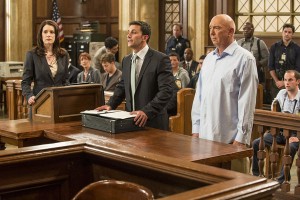 Brewster is just coming off playing FBI Special Agent Emily Prentiss on Seasons Two through Seven of CBS’s CRIMINAL MINDS, which begins its eighth season tonight at 9 PM. Brewster and her character both had a somewhat strange last two years on CRIMINAL MINDS – Emily was seemingly killed off in a heroic manner in Season Six, but then it was hinted at that she might have survived. She returned to the Behavioral Analysis Unit at the beginning of Season Seven, creating mixed feelings among her colleagues, who had all mourned her passing. Then Emily decided at the end of Season Seven to take a job with Interpol.

The following is a combination of an exclusive interview with Brewster about CRIMINAL MINDS and a conference call with Brewster and LAW & ORDER: SVU executive producer/show runner Warren Leight about the latter.

For starters, what can Brewster and Leight tell us about what the actress will be doing on LAW & ORDER: SVU?

“My character Paula Foster is prosecuting [series lead Mariska Hargitay’s character Olivia] Benson’s captain,” Brewster explains. “I’m going after him and I’m building a case. My character and Mariska’s character come together to offer each other information, and it becomes a friendship to a certain degree of two strong women in this line of work. While at the beginning they had different end goals, they team up to search out what’s happened.”

“I would say we put a very heavy load on Paget,” Leight elaborates. “The character that we’re asking her to play is not just an exposition carrier. There are a lot of layers to that character.”

As far as working with SVU’s leading lady Hargitay, Brewster enthuses, “In real life, I think Mariska’s one of the funniest women I’ve ever met and I just love working with her. I remember from when I did [“Scheherazade,” an episode as a different character] years and years ago how much fun she was. I really look up to her immensely – I think she’s just a powerhouse. I think Mariska is a wonderful woman who loves working with women.”

Leight tells us a little more of what we can expect in the Season 14 opener. “We ended the [thirteenth] season with a dead hooker in the captain’s bed and that’s all bad for precinct morale,” he says. “So Cragen [played by Dann Florek] is under a huge cloud of suspicion, but Danny Pino’s character Nick Amaro is also caught up in this. He was the last person to see [the prostitute] alive, and so he’s under a cloud and is aware that the others don’t trust him, and Amaro’s a sensitive guy. When he senses that after all he’s been through with Olivia, that she doesn’t completely have his back, for him, that’s a terrible betrayal. So there’s a lot of what I guess I call a triangulation in the squad room. Nobody knows what to make of [the situation]. Will the captain come back? If he does come back, will he have any authority? Will things be the same? There’s a lot of stress when your patriarch is under attack.”

What exactly happened with Brewster’s exit, re-entrance and re-exit from CRIMINAL MINDS?

“I think they wanted to make a cast change-up and it didn’t work,” Brewster says of the Season Six story events that removed Emily, along with A.J. Cook’s character Agent J.J. Jareau and briefly brought in Rachel Nichols as Agent Ashley Seaver. “It was the second or third time I know of, historically, that fans’ reaction actually affected a network’s [decision]. And so A.J. and I were brought back and unfortunately, Rachel was fired after we were fired [and then re-hired]. So there was a lot of firing that shouldn’t have happened. And it’s a shame – I think it’s a really simple case of, if it’s not broke, don’t fix it, and I think they recognized that.”

It wasn’t all bad – the cloak-and-dagger storyline dealing with Emily’s CIA past gave Brewster a lot to play. “The way that I was written out [the first time] was really exciting and interesting,” Brewster says, “and the writers were very excited about doing it. And I think they worked incredibly hard and wrote a really exciting, crazy story for me to leave on, and we had to tie it up when I came back.”

The experience also saw Brewster and company being directed by fellow CRIMINAL MINDS star Matthew Gray Gubler. “Matthew honestly is a friend of mine,” Brewster acknowledges, “I might be slightly biased, but I’ve asked the crew if I was biased. He’s a great director, and he’s so good with actors and he knows how good our crew is. And it’s a tough job. Matthew is a great director and he cares and he’s articulate and excited and he thinks out his thoughts and he has a plan. It sounds really dry and boring, but I love the guy. He’s a great director, and he’s going to go on and do really exciting things.”

Was there every anything on CRIMINAL MINDS that grossed Brewster out? “What’s grossed me out,” Brewster replies, “and I think it’s a testament to our crew, because it’s not stuff I was in or saw [on set] – whenever we [had] a serial killer who videotapes stuff, it’s really disgusting to me, and scary and horrible. And actually, when I see it on TV, I am mortified. But I think our crew is that good.”

When her contract came up at the end of CRIMINAL MINDS’ seventh season, Brewster opted to leave.  “It was a bummer when A.J. and I were fired,” she says. “I didn’t get over it. I care about everyone at CRIMINAL MINDS, but in my heart, I had left to a certain extent [with the first writing-out] and that’s sort of what they wrote for the character Prentiss [when she came back]. Playing Prentiss for six-and-a-half years – at a certain point, you’re so familiar with the rhythms and who your character is that you can reach a point where you get lazy, and I’m afraid I did that, and that was my fault, and that was one of the reasons I wanted to go out and do something else.”

Brewster says she was hoping to do comedy after leaving CRIMINAL MINDS, “But you just don’t say no to SVU – who would? Those guys are awesome,” she adds. “They work incredibly hard, it’s a really exciting environment, and so I was deeply flattered when they offered me the part. It’s pretty much the only [law enforcement procedural] show that I would do, but I love the show, so I would have been crazy to say no. On SVU, what I had to provide was trickier and harder for me, because it wasn’t a character that I knew. I was just incredibly lucky that Warren and [co-executive producer] Julie [Martin] were there and the director Michael Slovis and the cast care so much about making the best show they can, but it is intimidating. And I think that’s what I wanted – it was great to be challenged and excited and nervous and asking for help. It actually was a personal and professional experience that I will never be able to thank these guys enough for.”

Besides Brewster, can Leight talk about any other casting on SVU this year? “It’s funny – almost everyone in the cast we had in these two [Season 14 premiere] episodes, I keep wondering, well, is there any way I can bring them back week after week, but if they’re [playing] a felon, it’s very hard to keep them as a recurring character,” says Brewster. “We have some terrific performances from Peter Jacobson and Adam Baldwin and Reg Cathey. One of the things that’s really hard is, these people come in and you really enjoy working with them in the squad room, and you wonder how you can possibly bring them back some time later.”

Leight adds, “The interesting thing now – I have a squad room with four detectives, a captain. I have a new D.A. this year – Raul Esparza is coming in as a D.A. and he’ll be coming back for several more episodes,” says Leight. “I like the different combinations I get to play around with. It’s nice to see Ice-T [as Fin] with Danny, Mariska with Raul. I’m impressed by the SVU guys. We just had our three-hundredth episode and Danny and Richard [Belzer as Munch] and Mariska are [still] as invested as any actors I’ve ever worked with.”

Meanwhile, Brewster can be seen live once a month in as drunken but high-class spirit medium Sadie Doyle in THE THRILLING ADVENTURE HOUR, a staged parody of Forties radio serials that runs at Largo at the Coronet in Los Angeles. “We’re actually doing a show at the Bell House in Brooklyn, September 29,” Brewster announces proudly. “It’s our first time inNew York. I’ve been doing the show for seven-and-a-half years now, with Paul F. Tompkins, Marc Evan Jackson, Annie Savage, Hal Lublin, Craig Cackowski, Mark Gagliardi. It’s fun. If you like radio or you like comedy, come check us out.”

Brewster adds that people who can’t get to the theatre can still enjoy THE THRILLING ADVENTURE HOUR in audio podcast form. “They’re podcasts of the [live] show,” she adds. “We’re recording them and releasing them.”

With SVU entering its fourteenth season, how do Leight and the writers continue to come up with new storylines? “Unfortunately, rape and sexual violence is a big part of our society,” Leight replies. “I would love to run out of storylines. I don’t see that happening. Last year, there was a spate of powerful men behaving badly [in real life]. I don’t like to sensationalize these stories – it’s more we try very hard to shed some light into the dark areas of the human psyche and to actually depict the sometimes serpentine judicial process that victims and survivors have to go through. One of the rewarding things about SVU [is that] the show tries very hard and I think succeeds in giving victims and survivors a sense that they’re not alone, because we try to empathize with them. We get a lot of feedback from people who say they were able to come forward about incidents in their lives because the show helped them find a voice. I think we take our role very seriously.”