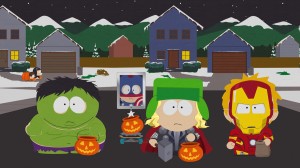 Cartman as the Incredible Hulk, Stan as Captain America, Kyle as Thor and Kenny as Iron Man in SOUTH PARK - Season 16 - "A Nightmare on FaceTime" | ©2012 Comedy Central

It’s been some time since SOUTH PARK has done a Halloween episode, but it was worth the wait as Trey Parker and Matt Stone come up with a new classic with “A Nightmare on Facetime.”

Sending up THE SHINING, Blockbuster Video’s financial woes, The Avengers and our obsession with Apple products, there’s enough good will here to provide ample laughs and a great story to boot.

When Stan’s dad Randy comes home and says the family is going to be rich because he just bought a business for $10,000, their hopes are dashed when they discover that business is a Blockbuster Video store. Stan reminds his dad people get movies now through Netflix, Redbox and streaming, not renting from Blockbuster, but stubborn Randy is steadfast and convinced it’s a great investment.

That is, until no one shows up to rent movies. The Blockbuster Video is reminiscent of the Overlook Hotel from THE SHINING and the episode plays up all the expected benchmarks of that great horror film (well, everything except for the “Here’s Johnny” line).

As Randy goes all Jack Nicholson, he also prevents Stan from going trick or treating with his friends and complicating their attempt at being the Avengers. Kyle comes up with a great idea though – Stan can use his iPad to participate through FaceTime. By using Kyle’s iPad for Stan to see – they’re all set.

The gags involving everyone treating the iPad version of Stan as Captain America is hilarious. And when some Redbox thieves come after them, they torture the Stan/iPad in addition to dumping it on the side of the road. Randy also becomes Gangnamstein at some point and the result is classic SOUTH PARK.

There’s even a Monster Mash costume party and a couple of funny digs at that popular song “Gangnam Style.”

The unfortunate truism of the episode though is the acknowledgement that Blockbuster Video has, sadly become about as vacant as a haunted house. It’s a great commentary on a lost commercial enterprise and all the jokes that take jabs at it are very funny.

Like last week’s “Going Native,” this episode finds SOUTH PARK also taking a step back and create a simple, yet effective little story. There isn’t anything overtly political on display and the story isn’t super complicated and ridiculous that it falls apart. “A Nightmare on FaceTime” is simple and sweet – and will likely become a perfect annual Halloween mainstay for years to come.