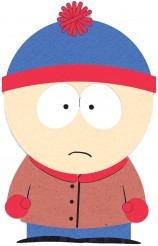 After two strong weeks, SOUTH PARK heads back into iffy territory with “A Scause for Applause”, a failed attempt at dealing with the disgrace of Lance Armstrong for using performance enhancing drugs.

In the SOUTH PARK version, everyone wearing “What Would Jesus Do” bracelets decides to cut them off when it’s discovered that Jesus used performance enhancement drugs to perform his miracles.

This leads to a dilemma with Stan, who decides he’s not going to cut off his bracelet like everyone else – resulting in everyone looking up to Stan. Then Stan falls from grace and the cycle continues.

Jesus shows up too, bummed out that he’s lost his credibility and both he and Stan try to find a way to get back into the good graces of society.

There are some funny gags throughout, especially when SOUTH PARK uses Dr. Seuss and his unique storytelling to hit home the episode’s theme. However, “A Scause for Applause” tackles familiar comedic targets that Trey Parker and Matt Stone have mined with much better results in so many episodes. It’s all just lukewarm and not very clever.

I have to admit, even though this episode didn’t work for me, I’m enjoying that more attention being paid to characters other than Cartman (last season was very Cartman heavy). And seeing Stan end up in a dilemma is always fun.

Still “A Scause of Applause” feels like one of those episodes that sounded great in theory and slowly fell apart before they could find a way to truly make it work. It’s the quandary the show faces when it tries to write, animate and produce an episode in seven days.

Next week is the season finale and I can’t wait to see whether this season ends on a high or low note (but I’m hoping they go out with a big bang).