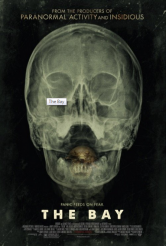 Filmgoers of a certain age recall the promo tag line “Just when you thought it was safe to go back into the water …” This was for JAWS 2, meant to create enough fear and fascination in viewers to keep them out of the ocean and draw them into the movie theatre.

Now THE BAY is here, and it’s liable to keep anyone who takes it seriously out of the ocean, the bathtub, the water fountain and very far indeed from the titularChesapeake Bay. It should be noted that, although the film’s events are fictional, much of what it discusses is real, including the water-borne flesh-eating bacteria and the fact that forty percent of theChesapeake Bay is dead from toxic waste.

Director Barry Levinson, who came up with the film’s story with Michael Wallach, who wrote the screenplay, says he was approached to do a documentary about Chesapeake Bayin 2010. However, Levinson felt that a FRONTLINE piece had already covered the topic quite well. Instead, he decided to do a fictional piece and THE BAY is the result.

Told from the point of view of Donna (Kether Donohue), THE BAY is a found-footage piece about twenty-four increasingly catastrophic hours in the life and death of seaside tourist townClaridge,Maryland. Three years earlier, Donna was sent there with a camera operator to cover the town’s annual Fourth of July festivities. These happen to coincide with an outbreak of a waterborne flesh-and-internal-organs-eating parasite, grown to abnormally large size thanks to pesticide exposure. The cumulative effect of lack of information and resources winds up making an already calamitous situation much worse.

By not having the hosts – that is, the humans – turn into flesh-eating zombies, THE BAY sits somewhere between a killer bug swarm movie and THE ANDROMEDA STRAIN, minus the comforting combat strategies. There are a few jump shocks and some moments of gross-out, but the primary horror factor here is a steady, queasy suggestion that an outbreak like this is possible.

Because THE BAY purports to consist entirely of found video, except the interview being taped with Donna in the present, there isn’t a lot of continuity or character depth. We do get a visiting couple (Will Rogers and CABIN IN THE WOODS star Kristen Connolly) who have no idea what they’re sailing into, and an emergency room doctor (Stephen Kunken, excellent) who receives almost no help with a sudden epidemic, but mostly we get just quick clips of people being affected by the parasites. It’s unsettling in the style of an anthology of well-chosen shorts, rather than in the manner of a full-blown horror feature.

Given what’s happening on the East Coast of the United States right now, with contaminated water in a lot of city streets, THE BAY may be a little too close to home to pass as entertainment in some quarters.  Still, its matter-of-fact tone, juxtaposed with its eerie, plausible subject matter, should prove compelling viewing for those in the mood to watch it.