Home » COPPER: SEASON ONE Highlights this week in Blu-ray and DVD Releases 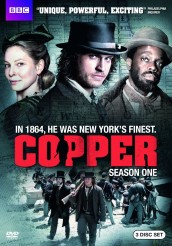 COPPER: SEASON ONE Highlights this week in Blu-ray and DVD Releases 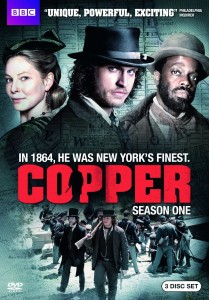 COPPER: SEASON ONE – A very interesting new series from the BBC based on the early days of New York and the crime fighting after the Civil War has ravaged the country. After returning home from the war, Detective Corcoran (Tom Weston-Jones) discovers his daughter dead and his wife missing. While this bit of the series if the mythology aspect that comes into play a lot during the course of the first season, Corcoran uses this aspect of his life in helping those around New York when fighting crime. It is an interesting mix of class warfare as much of what happens in the poor neighborhoods that he patrols, he finds himself often going to the wealthier aspects of the city for answers. There are also strong ties to the Civil War and what has happened after the deadly battle that comes into play often that either have to deal with the investigation in question or deal with his missing wife and murdered daughter.

With loads of great costumes and set pieces, this is certainly one of the more unique series on TV and shows that not just American television can produce great period piece television (well, anyone that has seen FOYLE’S WAR should know this already). COPPER is certainly worth your time and money and on Blu-ray everything looks that much better. If you are a fan of police drama or just good drama this is something you should invest in. 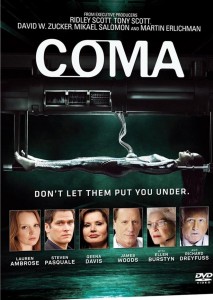 COMA – Now you’d think that a re-imagining of the classic thriller COMA produced by Ridley and Tony Scott and starring Lauren Ambrose (of SIX FEET UNDER fame), Geena Davis, James Woods and Richard Dreyfuss would be simply awesome, right? How could they screw up something that is ripe for the picking with good stars? Turns out they can. Instead of building the tension and the intrigue, Ambrose’s character is plopped right into the thick of it doing illegal and unnatural things that any human would do during the first half of the two-part mini-series. By moving things along so quickly, much of the mystery and the suspicion is swept under the rug in favor of just moving the plot along. The result is a series of illogical and in-your-face clues that make for an obvious conspiracy, one that eliminates much of the fun of what it could be or what it was in the previous 1970s films. Still, it is a well-made production and that might be enough for you to check it out on Netflix. 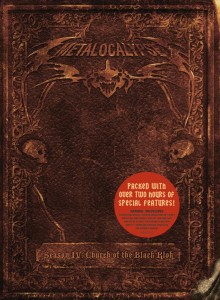 METALOCALYPSE: SEASON FOUR – After taking a bit of a hiatus on DVD, METALOCALPYSE is back with another 12 episodes from the fourth season featuring all-new heavy hitting songs and guest spots from classic metal bands (Cannibal Corpse, 3 Inches of Blood). Included is the new Dethklok album with all new metal mashing mayhem as well as a new 90 minute Shakespeare reading, fan art, featurettes on members of the band and much more. Obviously a must-have for fans.