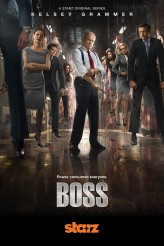 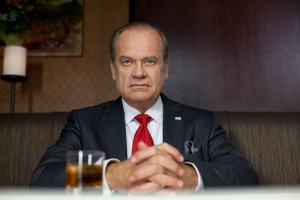 In BOSS, now in its second season Friday nights at 9 PM on Starz, Kelsey Grammer stars as fictional Chicago Mayor Tom Kane, a politician of such ferocity that he makes Rod Blagojevich look like a bake sale coordinator. Kane’s problems include estrangement from both his wife (Connie Nielsen) and daughter (Hannah Ware), treacherous former allies and a debilitating disease that is affecting his mental faculties. Kane would like to do something of value with his legacy, but facing corruption from both outside and within himself, this may not be possible.

ASSIGNMENT X:  How did BOSS come about, and how did Kelsey Grammer come to be your leading man?

FARHAD SAFINIA: We met over a cup of coffee initially. The first meeting we ever had, we were brought together by Brian Sher, who’s one of the producers on the show. I did not know Kelsey before then. In that meeting, Brian and Stella Stolper, who are [two of the executive producers] on the show, asked me if I had any ideas for a TV show, and I didn’t. But I always wanted to tell this particular story. I saw Ian Holm do KING LEAR in the late Nineties in London, and I was blown away by his performance, because for the first time, I had seen King Lear played angrily. The man who understands that he’s not what he was and he’s on his way out is furious about it. Most other portrayals of that character I’ve seen are sort of self-loathing, a little bit vain, but in his particular case, he was absolutely furious, and I thought, “A man in that position of power would be that angry if he thought he could defy time, if he thought he could defy God, he would be that angry about not realizing that defiance.” And so I’m sitting across from Kelsey in this coffee meeting, and we were talking about general things, and they said, “Do you have any ideas for a TV show?” And I turned round and said, “Well, I’ve always wanted to do a take on LEAR, but with this variation on the character that I saw Holm do.” And in the same moment, without knowing that I was going to say this, Kelsey starts quoting passages of LEAR back to me and talking about, “Well, this could be like that, you could turn this speech on its head into that.” And in the moment, the idea came together from that.

AX: Have you seen Kelsey Grammer do any Shakespeare?

SAFINIA: I have not actually seen him onstage. I know he’s played MACBETH. I saw him in LA CAGE AUX FOLLES two years ago, but that’s not quite the same [laughs].

AX: As a British writer, why set BOSS in Chicago rather than in Britain?

SAFINIA: [laughs] There are a couple of answers to that question. Yes, the same thing exists in England. I think the same thing that exists in the British Parliament exists in [any contemporary democratic government]: And not only that, I think it’s also existed throughout time. I would propose that you had similar kinds of dynamics in the political wars of the Senate in Rome during its heyday, or in Florence,Italy, during the rise of the Renaissance and the families that ruled that city at the time. I think the thing that’s interesting, though, is that there is something specific and peculiar and interesting in a good way about the hope that we have in the American political system. We have a lot of aspiration and hope for it to be the best system that has been invented. It has taken a lot from what’s come before it in terms of Greek democracy and so on, but I think we’ve reached a point where we want it to work for us as people. And so it is the ultimate place in which to study this kind of corrupt behavior, is a place in which we have such high aspirations for what the system can provide for us as a means of government. By the way, I’m not a critic of the American political system in any way. I’m not singling it out. We happen to be set in Chicago, but I believe these kinds of machinations occur everywhere across the world.

As an American, I think you’ll notice that there’s something very American about the show. The fact that its characters want to reach very high – I don’t think you see that often in an English television show. There’s a sort of incredible desire by English culture and British culture to want to hold people in check. In America, we celebrate people who reach for the stars. We really want them to bloom and go for it. And in that way, the ambition that accompanies that, and the dark side of that ambition is a peculiarly American thing. And so I think that this particular vibe of the show could only really work in, not only in the United States, but in a city that represents that kind of reaching and ambition as well, like Chicago does. It really is an ambitious city, in every sense of the word.

AX: You have characters who are somewhere on the gray scale rather than drawn in black and white, although some of them are very dark gray …

SAFINIA:. We have such a strong tradition of storytelling in the Western canon of literature, theatre and so on. And I think one of the things that is fascinating is that there is a style of storytelling in which your explorations of how far you’re dramatizing something can be not humanistically relatable, necessarily. What I’m trying to say is, when you watch RICHARD III being performed, you walk away from it feeling some sympathy for Richard III as a character, but during it, you’re just watching the dastardly deeds of a truly well-drawn antihero. And in that way, that’s something we wanted to try and pull off with this show. The argument could be, “Well, why can’t you have one or two gray sort of good people in the show?” I think we actually do.

I think, because the performances from Kelsey and Kathleen [Robertson as [Kitty O’Neill] are so strong that people tend to only remember that, but there are some characters in the show who are trying to do good things. They may fall short, but they’re not after personal gains or corrupt means at all. And I would say those characters sometimes achieve goodness and sometimes don’t, but I think if you look at the show carefully, I don’t think all of them are the same in that way, and I’m thinking specifically of his daughter and I’m thinking of Sanaa Lathan’s character [Mona Fredricks] this year, and I’m thinking of some of the things that Troy Garity’s character Miller goes through. These characters are trying to do good in a corrupt world. That’s the idea behind the show as a whole. So yes, the dazzle and the explosive fireworks of Kelsey and Connie and Kathleen’s characters are really great, but there are others trying to do other things.

For me, the first season ended on a note of optimism. Many people don’t see that, but for such an embedded, entrenched, corrupt person as Ezra Stone [played by Martin Donovan] to turn out the way he does is what I hope is to happen, for political machines and systems to eventually be broken down. It’s got to be from the inside. We can’t really do it with the power of the ballot box. You have to do it from operators within, following more noble paths than they do. That was a long answer.

AX: Kane’s inner circle was decimated by the end of Season 1. How many of the decimated characters come back this season?

SAFINIA: Everyone. But in different guises. And that’s part of the surprise of what’s going to come in Season Two is in what capacity can they possibly come back. Some of them – politics is such a fluid, vicious game that allegiances can change and people can come back to positions you do not anticipate. That’s part of the fun of this experience.

AX: Are there any incidents in recent or contemporary real politics that you’re weaving into the show as a B story?

SAFINIA: Like I said, I think we try to cushion and embed the show in political storylines that feel germane and real to the environment ofChicago politics, but the show busies itself so much with how politics works in its core that I think if we get too specific about policy, we will lose people. I don’t really want to have a debate about housing, or a debate about healthcare, or finances, or the financial system, within the show, because what I’m trying to say specifically is that, no matter what the topic, the dynamics by which people arrive at their end goals is the stuff that we’re studying, that we’re looking at, and that often is dramatic, it’s thrilling, it’s corrupt, it’s dark, it can sometimes lead to goodness, but also to horror. That’s what’s interesting to me. If I started to take positions on what I feel about the housing crisis in this country, or what I feel about the healthcare system in this country, then I think the audience would be incapable of seeing past that policy issue, and seeing the mechanics of how things are achieved.

SAFINIA: In that sense, yes, because I think here’s the thing – I don’t think a Rod Blagojevich is particularly a problem within the Democratic Party. I think Rod Blagojevich as a problem exists to both sides of the political spectrum, so yes, in that sense, absolutely [things like that are] part of the show. You may see characters go through things this season and last season that you think, “Wow, that really rings true in real life. That’s something that I’ve seen in this character and that character in real life.”

AX: What would you most like to say about BOSS right now?

SAFINIA: Oh, God. [laughs] I will say this – I think if you liked Kelsey’s performance in Season 1, you have to see what he does in Season 2. He is a gem in this. And he’s right age, right time, right guy with the right talent, doing incredible things. I think you’ll be very much blown away.