The helmer talks about depicting Alfred Hitchcock and Tippi Hedren 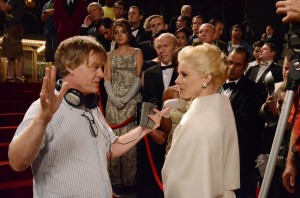 Filmmaker Alfred Hitchcock had such a specific way of depicting beautiful blonde women that “Hitchcock blonde” is still part of the Hollywood vernacular. At the time she starred in THE BIRDS and MARNIE for him, Tippi Hedren was the epitome of the Hitchcock blonde. Hedren kept relatively silent for many years, but according to her, Hitchcock was harrowingly abusive. THE GIRL, which premieres Saturday night at 9 PM on HBO, dramatizes Hedren’s account of their working experience, with Sienna Miller as Hedren and Toby Jones as Hitchcock.

THE GIRL director Julian Jarrold, whose credits include the delightful musical KINKY BOOTS and the disturbing docudrama APPROPRIATE ADULT, takes some time to talk about his new film.

ASSIGNMENT X: Has Alfred Hitchcock, as a filmmaker, been an influence on your own work?

JARROLD: Yes, I think he has, but I think most directors, whether they know it or not, are influenced by him, because there are so many iconic shots and the way of telling stories and that thriller/suspense kind of style, you can’t help but be influenced by it. I have a couple of personal favorites. I hadn’t seen BIRDS or MARNIE for a long time, actually, but that was a real attraction to going and doing the film.

AX: When you read Gwyneth Hughes’ script, and perhaps other source material, for THE GIRL, were you surprised by the story, or did you think it seemed plausible, given Hitchcock’s worldview as expressed in his films?

JARROLD: I was very surprised. I always wondered where the strange ideas in his films came from [laughs], and actually, what was fascinating was that this story, Tippi’s story, really illuminated some of that. And he’s a very difficult to understand character, very sort of enigmatic in what drives him, but I think there was something about Tippi that really drew certain things out of him, and you can see that very clearly in many of his films.

AX: Did this cause you to reflect on any relationships you’ve had with any of your colleagues and think, “Oh, was I abusing my directorial prerogative there”? Not, obviously, to the extent depicted in THE GIRL.

JARROLD: Well, it’s funny – we made a joke about it. When I was directing Sienna in the BIRDS attack scene, it was incredibly difficult to do, because we had a limited number of birds and we put her up against a wall with a netting and the only way to do it was to keep the camera rolling and just do take after take after take, and I did feel for a bit like Hitchcock during that, because I could see she was suffering a little bit in that scene.

AX: To ask a production question, it seems like one of the dangers there would be that birds aren’t generally housebroken. Was there a problem with them relieving themselves on people and equipment?

JARROLD: Funnily enough, that didn’t seem to happen. I mean, actually, the curious thing was, we started shooting in the day and went into night and of course, when you hit night, the seagulls will go to sleep. So actually, they were quite docile after about six o’clock [laughs]. It was tough scene for [Miller], but she did very well.

AX: Was it tough for you, as somebody who admired Hitchcock’s work, to depict him as so abusive in his life?

JARROLD: No. There was always the danger, when I first looked at the project, that he was just painted as a simplistic monster, and that’s not true. I hope that we’ve shown the nuance – he behaved monstrously, badly, but he wasn’t a complete evil person in himself, and I hope that with Toby’s performance, you get some of the yearnings and some of the keys to his character. And I think, really, for an audience, there should be mixed feelings at the end, and you actually might feel quite sorry for him and a certain amount of pity, even though he has behaved so badly.

AX: How did you come to cast Toby Jones as Hitchcock? The GIRL team did an astounding job of making him look like Hitchcock, but prior to this film, he did not on the surface seem to  look at all like Hitchcock, including in height. Hitchcock seems to have been not hugely tall, but taller than Toby Jones.

JARROLD: Well, actually, no. He was the same size as Toby. He was five-foot-five or five-foot-six. He had the illusion. He was clever. He was a showman. He made himself big and seemed tall. And Tippi herself’s not that tall, but you think she is, because she’s very slim and beautiful. But I knew. after seeing CAPOTE and films like that, Toby was somebody who could just disappear into the part and he’s such a great actor.

AX: What would you most like people to know about THE GIRL?

JARROLD: I think it’s an interesting exploration of a very complex relationship at a particular time and I think people will be fascinated by it. Although the world’s changed, the power relations do still exist and this sort of abuse still happens, even though there are checks and balances now for it.

Exclusive Interview: Julie Gardner on the Evolution of TORCHWOOD - Par...
THIS IS US: Milo Ventimiglia talks new NBC show and GILMORE GIRLS revi...
Interview: Composer Lesley Barber visits MANCHESTER BY THE SEA
Dorking Out - Episode 28: The 2017 Has To Be Better Than 2016 Edition