Another fine episode, with the situation between Dexter and Debra still evolving and morphing 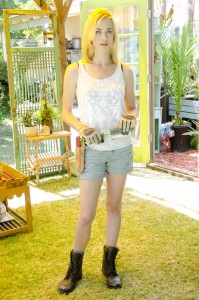 The dynamic between adoptive siblings Dexter (Michael C. Hall) and Debra (Jennifer Carpenter) clearly can’t remain static now that Deb, as a homicide detective, knows her beloved bro is a serial killer. However, DEXTER’s episode “Buck the System” moves in unanticipated directions as Dexter tries with actions rather than words to prove to Deb that he is, perhaps, a “necessary evil.”

When Dexter flips out and nearly strangles a suspect who won’t let him take a DNA swab in an interrogation room, Deb realizes Dexter is having some serious problems. Dexter tells Debra if she doesn’t stop riding him. Dexter looks into a man called Louis Speltzer (Matt Gerald), paroled for assault but suspected (without actionable proof) of murdering several women. Dexter urges Debra to look into Speltzer, giving her the fruits of his “vetting” process. In fact, Speltzer has set up a maze like something out of a horror movie in a house he’s occupied for a few days – he lures a woman there, then dons a horned mask and chases her.

Debra and Dexter separately wind up at Speltzer’s house. Debra gets caught in the maze and Speltzer almost kills her before Dexter shows up and hits Speltzer with a board. Debra and Dexter both search for Speltzer’s victim, but when they find the woman, she’s dead, and Speltzer has run off. Debra, sharing Dexter’s intense frustration – she was fully prepared to shoot Speltzer – says she understands what Dexter does, though she does not approve. Deb notes that Dexter isn’t just a vigilante – his blood slides mean that he takes trophies from his kills. She tells Dexter to move out of her place, sorrowfully noting that everything has changed. Dexter is sorry Debra is upset, but glad to be free of her supervision.

Meanwhile, Dexter manages to get the hateful Louis (Josh Cooke) fired from the lab by mailing in the stolen mannequin arm from the Ice Truck Killer, including a note purporting to be from a dissatisfied eBay customer and naming Louis as the seller. Masuka (C.S. Lee) is livid and cans Louis on the spot – though Masuka is intensely grateful to have the arm back. Dexter also anonymously sends Louis’ girlfriend Jamie (Aimee Garcia), who is also Dexter’s babysitter for little Harrison, a sex video showing Louis with another woman. Jamie kicks Louis to the curb.

Furious, Louis tries to sink Dexter’s boat. His timing is awful. Ukrainian mob boss Isaak (Ray Stevenson) and his crew have tracked their missing man Viktor (actually killed by Dexter) to Dexter’s marina slip. At first, they think Louis is Dexter – when they realize they’ve got the wrong guy, Isaak kills Louis and leaves his men to dispose of the corpse.

Additionally, Dexter is sent to get a DNA swab from Hannah McKay (Yvonne Strahovski), once the underage girlfriend of a serial killer, now a seemingly innocent, reformed and sexy adult running a plant nursery.Sparksstrike.

Debra realizing what a fine line there is between her own willingness to break rules to catch a killer and Dexter’s drive to outright break the law makes for thrilling, thoughtful television. Inevitably, we find ourselves in Debra’s position, balancing our desire for either Deb or Dex to stop Speltzer with Deb’s/our comprehension of what that zeal can really mean. It’s a splendid instance of “show, not tell” on an issue that is central to DEXTER’s existence as a television show.

The teleplay by Jace Richdale also offers some great dialogue, such as when Dexter asserts that he has to be who he is, and Debra observes, “It’s a capital offense to be who you are.” The horror movie trappings in Speltzer’s maze and especially his borderline absurd-looking costume underscore that, in immediate visceral terms, we care far less about the legalities than we do about somebody stopping this jerk by any means necessary.

Dexter’s effective efforts to get rid of Louis are entertaining and satisfying, though it feels a bit like there should have been more to Louis’ story – all of Louis’ sinister actions were simply borne out of his pique at Dexter disliking Louis’ video game? Really? If that’s the full explanation, it’s been a buildup stretching over two seasons to a wet squib of a resolution, though admittedly what happens is very surprising.

There’s a very nice scene between Dexter and Isaak, each unaware of who the other is, that’s offhand and impressively telling.

Mainly, though, “Buck the System” is an episode that speaks to the heart of DEXTER – how far can Dexter go and how far do we normal people actually want him to go? The show wisely doesn’t insist on an answer, but it frames the question perfectly.