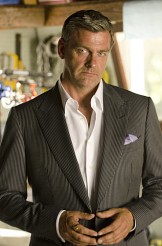 Even by DEXTER’s standards, some astonishingly intense emotions between Dexter and Deb 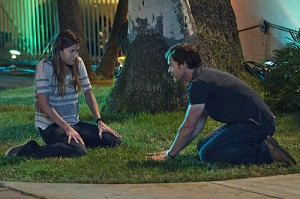 “Sunshine and Frosty Swirl” picks up where DEXTER’s previous episode “Are You …?” left off, with Dexter (Michael C. Hall) at last admitting to his sister, Miami Metro Police Lieutenant Debra Morgan (Jennifer Carpenter), after she confronts him that, yes, he is a serial killer. Deb runs from Dexter’s apartment, gets as far as the sidewalk and vomits. Dexter gently approaches and suggests for both their sakes that it would be better to have the conversation they must have indoors.

And here is where we know DEXTER is different from every other serial killer project out there, because we don’t question Deb’s intelligence or her sanity for trusting Dexter. Deb hears Dexter out as he explains about the code given to him by their late father Harry (James Remar), so that he only kills people who are murderers themselves. Deb doesn’t fully buy this and winds up punching Dexter in the face before exiting, but the next day, she’s come up with a plan. Dexter will move in with her and they will spend twenty-four hours a day together, so she can make sure he doesn’t give in to his homicidal urges.

It turns out that being a police detective is the least of Deb’s worries. She refrains from turning Dexter in not because she’s afraid of incriminating herself but because, as she explains, Dexter is her brother, she loves him and she can’t stand the thought of him spending the rest of his life in prison or being executed.

Dexter thinks Deb’s idea is crazy, but he goes along with it and actually calls her when he’s tempted to kill. He doesn’t of course mention that he drugged her so that he could get a little alone time, but there’s only so much he can change overnight.

The potential victim is Louis (Josh Cooke), the Metro division unofficial IT guy and game designer who sent Dexter the arm from the Ice Truck Killer case. When Dexter corners him, Louis swears it was just to make Dexter nervous because Dexter had disapproved of Louis’ serial killer videogame. Dexter makes Louis promise to quit the precinct, but Louis later shows up at Dexter’s apartment, still dating Dexter’s babysitter Jamie (Aimee Garcia) and not about to give up his job. Dexter drugs Louis, but winds up simply dumping him in a park, then phones Deb, who is happy Dexter called her rather than going through with it.

This does seem a bit of a break from Dexter’s normal behavior, as he hasn’t found (at least, not yet) any actions on Louis’ part that would make him a menace to society, as opposed to simply a thorn in Dexter’s side.

Dexter winds up helping a police squad trying to dig up bodies buried by long-incarcerated serial killer Wayne Randall (Daniel Buran), who says he has experienced a surge of conscience and wants to help close the cases. Dexter asksWayneabout this andWaynesays that he has gotten rid of his rage by internal “surrender.”Wayneshortly thereafter commits suicide by running out in front of a truck, and Dexter realizes thatWaynenever intended to help the police find bodies – he just wanted to get out in the sunlight and have a frosty swirl cone one last time.

Meanwhile, Captain LaGuerta (Lauren Velez) quietly pursues her own investigation of the blood slide she found near Travis’ body and learns the blood is from Travis, meaning that the Bay Harbor Butcher (thought to be the late Sgt. Doakes, though LaGuerta never believed it) is likely not dead after all.

Also, Ukranian crime boss Isaak Sirko comes to town seeking his missing man Viktor, who was killed by Dexter for murdering one of Miami Metro’s detectives – though right now Dexter is the only person who knows what happened to Viktor.

Structurally, the episode is very sound, but it resonates most strongly in the scenes between Dexter and Deb. There are moments of pitch-black humor, such as when Dexter hesitantly opens up to Deb, trying to explain about his drive to kill and brings up his Dark Passenger. Deb is incredulous: “You named it?” But even more, there is extraordinary power Carpenter’s portrayal of Deb’s bone-deep pain and even fiercer loyalty, and the delicacy of Hall’s gentle handling of Dexter’s attempt to respect Deb’s emotions.

C.S. Lee as the perpetually crass Masuka gets a few very funny one-liners – there’s a great exchange between him and Hall’s Dexter in the evidence locker – and David Zayas as Batista has and provides a lot of fun throwing his weight around and harassing the proprietors of a strip club who are hiding evidence. Stevenson doesn’t have much screen time so far, but he’s perfectly formidable as a man who speaks softly and carries a big screwdriver, and we can’t wait to find out what Louis is actually doing.

It’s all very suspenseful and exciting, but most of all, it is moving. That’s a thrill that only the best TV in any genre can deliver.