dancing with the stars helio castroneves

DANCING WITH THE STARS: ALL-STARS Season 15 Recap: Drew Lachey and Helio Castroneves get kicked off DWTS in double knock-out 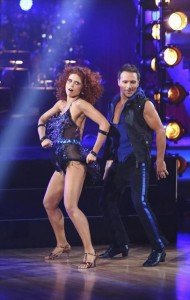 Anna Trebunskaya and Drew Lachey in Week 3 of DANCING WITH THE STARS: ALL-STARS - Week 3 | ©2012 ABC/Adam Taylor

It was a heartbreaking night on DWTS: Season 15 as we said goodbye to two former champions Drew Lachey, along with Anna Trebunskaya, and Helio Castroneves with Chelsie Hightower.  It was like two old friends visiting whom we haven’t seen in years are now suddenly gone again in a poof.  The night was full of anxious couples more nervous than excited; knowing that at some point a double elimination was eminent.

To lighten the mood, Frankie Mareno performed accompanied by the DWTS Troupe and special guests Kyle Massey & Lacey Schwimmer. Next let off the hook were Johnson & Hough and then Apolo Anton Ohno & Karina Smirnoff. Also safe from elimination were Kelly Monaco & Val Chmerkovskiy, which left Lachey & Trebunskaya in jeopardy and then…out of the competition.

A video segment with the judges praising the couples and calling the night the best night of DWTS ever was followed by an interesting new segment. Each couple picked next week’s dances for another couple. Last place picked first place’s dance and then second to last picked second place’s dance and so on. Then the process was reversed. The selection of dances were some never-before-seen on the show. They included Bollywood, Disco, Mambo, Bolero, Hip Hop, Jitterbug, Contemporary, Broadway, Charleston and Rock N. Roll. It will be an interesting event next week, to say the least.

The AT&T Spotlight Performance was a young impoverished tap dancer Joshua Johnson who danced to raise money for school. I am sure after tonight’s tap tap tappin’, he’ll be off to college! Ironically, after Johnson tapped, Karmin’s performance was to be outshone by the eager newcomer.

Lastly, it was down to Sabrina Bryan & Louis Van Amstel, Helio Castroneves & Chelsie Hightower and Bristol Palin & Mark Ballas. Unbelievably, yet again, the couple that should have gone – BP & MB – did not and instead we saw season four’s champion Castroneves depart along with Hightower. Maybe, like me the fans are starting to see that the previous winners shouldn’t be there and that this show should be a second chance for those who were voted out too soon, or the runner ups who came soooo close. Either way, thankfully Bryan stayed! She deserves to be there more than anyone else does! Watch out Smith, Ohno, Monaco and Johnson! Stay tuned!