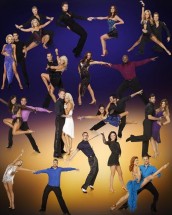 DWTS: All Stars shows no mercy from judges! 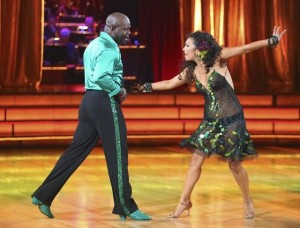 The season premiere of DANCING WITH THE STARS: ALL-STARS proved to be more serious than frivolous. Boy, the judges aren’t kidding when they said they expect more from these “dancers”. I have never seen them score so harshly for the very first show of a season. It’s clearly evident that past champs and runners up aren’t being giving a free pass this time around and now, more than ever, they need to prove themselves, especially those who haven’t been on the dance floor for 5 or 6 years. Some thought maybe they would skate on by with their sexy looks – I am talking to you Pamela Anderson. She looked like she had just started rehearsing yesterday. Why even bother coming back if you aren’t going to take it seriously? She and partner Tristan MacManus scored a lousy, yet deserving, 17, the lowest score of the night.

The others faired far better. Emmitt Smith and partner Cheryl Burke garnered the top spot of the night with a 24.5, with Gilles Marini and Peta Murgatroyd earning marks right on their heels with a 24. Third place was the most famously and undeservingly axed contestant in the entire 15 seasons – Sabrina Bryan who knocked it outta the building tonight with a superb performance and a score of 22.5. Partnered with Louis Van Amstel this time, she worked hard to not let a premature exit happen again. Previous champs Shawn Johnson, with Derek Hough, Apolo Anton Ohno, with Karina Smirnoff, Helio Castroneves, with Chelsie Hightower, Kelly Monaco, with Val Chemerkovskiy and Drew Lachey, with Anna Trebunskaya, all received a 21.5 or 22.

Joey Fatone reteamed with partner Kym Johnson and Melissa Rycroft also paired with her former partner Tony Dovolani. They received a 21 and 20.5 respectively. Looking better than ever on the dance floor, Bristol Palin, with previous dance compadre Mark Ballas, gained some well-deserved respect from the judges with her best performance to date. Kirstie Alley with Maks Chmerkovskiy also did well, although the judges seemed a little tough on her, uh-oh Maks didn’t look pleased with her disappointing 19.

Still, DWTS: AS is anyone’s game. To predict a winner at any point in the dance off would be impossible, but, boy the journey will be fun!

Drew Lachey (singer) and his partner Anna Trebunskaya
He is always fun to watch but his lines need more extending. Len Goodman said his Foxtrot was too hectic. Carrie Ann Inaba thought it was a little too rigid. Bruno Tonioli said it had a lot of energy.
Scores: Inaba – 7, Goodman – 7, Tonioli – 7.5, Harland – 7.5

Melissa Rycroft (TV reality star) and her partner Tony Dovolani
She’s still got it and then some! Inaba called her lines gorgeous. Tonioli said she needed more body contact with Dovolani. Goodman thought her Foxtrot was a little too theatrical.
Scores: Inaba – 7, Goodman – 7, Tonioli – 7, Harland – 7.5

Joey Fatone (singer/actor) and his partner Kym Johnson
He is a performer that’s for sure. Goodman loved his high performance Cha Cha Cha. Inaba called him one of her favorite showmen. Tonioli said he always brings it
Scores: Inaba – 6.5, Goodman – 7, Tonioli – 7, Harland – 7.5

Pamela Anderson (actress) and her partner Tristan MacManus
She must have come to the wrong party because she looked lost. Goodman called her Cha Cha Cha a bit shaky. Inaba told her to get to work. Tonioli said she had the look now get to work.
Scores: Inaba – 5.5, Goodman – 5.5, Tonioli – 6, Harland – 6

Shawn Johnson (Olympic gymnast) and her partner Derek Hough
She has become a more graceful dancer. Goodman didn’t think it looked like a Foxtrot. Inaba said that’s what all stars is all about. Toniioli said we got two dances for the price of one.
Scores: Inaba – 8, Goodman – 6.5, Tonioli – 7.5, Harland – 8

Gilles Marini (actor) and his partner Peta Murgatroyd
One of the sexiest contestants ever! Goodman said he had great balance in his Foxtrot. Inaba said she missed him. Tonioli thought his technicality was very good.
Scores: Inaba – 8, Goodman – 8, Tonioli – 8, Harland – 8.5

Bristol Palin (TV reality star) and her partner Mark Ballas
She has loosened up! Goodman took note of her improved confidence. Inaba called her the most improved. Tonioli thought she had been refurbished dancing her Cha Cha Cha.
Scores: Inaba – 6.5, Goodman – 6.5,Tonioli – 6.5, Harland – 6.5

Who’s going home: On just scores and lack of effort alone, it should be Anderson & MacManus.

Who Has Legs To Take Home The Mirror Ball: Every single one of them, except Anderson and Palin.