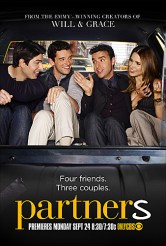 A surprisingly bland comedy despite a fine cast 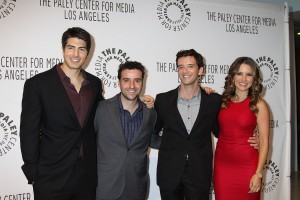 One of the biggest surprises about the new CBS comedy PARTNERS is how safe it plays its premise.

That turns out to be both a good and a bad thing. It follows architects Louis (Michael Urie) and Joe (David Krumholtz) as they navigate their long-term professional career and their own personal love lives. The twist (if you can call it that) is Louis is gay and Joe is straight.

In the pilot, Joe has been in a long-term relationship with Ali (Sophia Bush) and is feeling pressure to marry her. He’s about to break up with her, when he realizes he does love her and decides to propose. Louis botches this, because he thinks they’re breaking up and Ali gets wind of this causing all sorts of sitcom-esque misunderstandings.

Louis isn’t perfect either in his relationship. He’s dating a nurse named Wyatt (Brandon Routh) but he keeps telling people he’s a doctor instead.

What feels very progressive about PARTNERS is the sexual orientation of Louis is not really that big of a deal and the relationship with Wyatt feels very grounded and as real as a sitcom relationship can get. Urie doesn’t play Louis too over-the-top and neither does Routh. Plus the camaraderie Urie shares with Krumholtz is very strong as well.

The problem with the series is it doesn’t strive for bigger, better and funnier things. It’s just dull and boring.

As with all “Pilot” episodes, it’s clear the show needs some time to find its footing. And with WILL & GRACE creators David Kohan and Max Mutchnick pulling the strings (and basing PARTNERS loosely on their relationship) clearly there’s a bigger picture here.

Unfortunately, all I saw in the “Pilot” was good intentions and very few laughs. I really like the cast though and that may be enough to allow the show to coast as show tries to find itself. The premise is simple enough, but it doesn’t mean it should short-change the audience on actual laughs.